"Restrepo": Natgeo, Junger and Hetherington give us reality film of Adghanistan combat 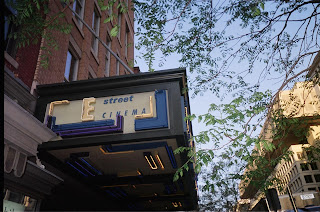 “Restrepo” takes combat docudrama up a notch beyond “The Hurt Locker” (which used actors), being a 15 month video log of an actual Army Airborne (Ranger I believe) in a secluded area of Afghanistan, near the Pakistan border, called the Korangal Valley. It is filmed by Sebastian Junger (author of “The Perfect Storm”) and Tim Hetherington, who must have lived with the unit for much of that time, exposed to combat dangers themselves.

The name of the film comes from a soldier who dies in action early (the soldiers use the term “bled out” talking about a neck wound); then the unit names an outpost after him. Captain Dan Kearney (again, the real person, not an actor), a rather visible paragon of male virility, runs the unit. The film contains some real combat firefights (a little more credible than those in “Hurt Locker”, viewed in retrospect), mostly soldiers firing defensively from their high, Masada-like outpost, and a lot of interviews with individual soldiers. The unit cohesion and forced intimacy of military life becomes apparent in the confined, ramshackle outpost. At one point near the end, the directors and soldiers stage a makeshift disco and a dirty dancing scene among presumably (but not always certainly) heterosexual male soldiers, almost a parody of a gay bar. The social aspect of the film make hit hard (perhaps deliberately) while the end of “don’t ask don’t tell” is now being brokered by the Pentagon and Congress.

The film also presented some of the soldiers as feeling psychologically driven toward extreme risk taking, a personality trait that may not fit well in later re-adaptation to civilian life.

The look of the film is interesting; the vegetation in the mountains is rather sparse, the climate arid, with just some winter snow, rather like some of interior California.  Back in late 2001, the press had called Afghanistan a place "at the ends of the Earth". The movie aspect ratio is standard (1.85:1) but the movie could have benefited from full anamorphic wide screen. The combat sounds in Dolby Digital are stunning.

The distributor is National Geographic Entertainment (a non-profit); I’m surprised that one of the established commercial outfits like Lionsgate or, of course, Summit, didn’t pick this up at Sundance. But “reality” filmmaking (even as in a couple of family-related films reporter here recently) seems to be a coming thing and should attract mainstream movie companies in time.

Both the 7 and 10 shows at Landmark in downtown Washington last night sold out (small auditorium), with audiences mostly male and young.

Here is the Sundance YouTube video of an interview with Hetherington and Junger.

I met Mr. Junger at a booksigning party for “The Perfect Storm” in 1998 in Miineapolis. Wikipedia says he lives with his wife in New York City and part-owns the Half-King, which I visited in 2000 (in Chelsea). I seem to remember his apartment or condo on Larry King Live as (like mine) filled with books and computers, and a cat jumping into the picture. Junger, given his biography, has certainly “paid his dues” with hazardous work to trigger his journalistic career. (Will he try a novel? It’s time for that.) In the summer of 2000 (I was still in Minneapolis), I posted a “review” of the Columbia film “The Perfect Storm” (Wolfgang Peterson) on an AOL discussion board, in which I commented on the economic forces compelling the fisherman to make delivery on their catch and risk sailing through the storm. Someone got offended by this (as if I thought the pressure on the almost Biblical fishermen were morally a good thing and as if they belonged in a political underclass), and sent me nasty emails and flamed me on AOL’s boards. It was most bizarre online incident, fourteen months before 9/11.
Posted by Bill Boushka at 8:02 AM