The other "Enough!" movie is a small film about the civil war in Algeria, with a journalist in peril ("Barakat!"); the word means something here 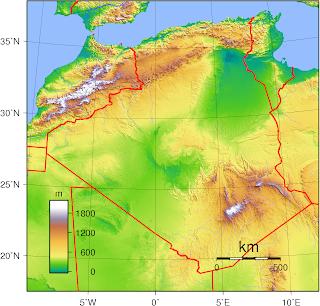 The indie “Enough!” (“Barakat!”, directed by Djamila Sahraoui) is a curious little film from Algeria, from the First Run Features Global Lens Collection, about the Algerian civil war in the 1990s, about which American viewers probably know little now.

A female surgeon Amel (Rachida Brakni) fears her journalist husband has been kidnapped by rebels because of his controversial articles. Here the film probably recalls “A Mighty Heart” (see this blog June 24, 2007), but it becomes much more intimate and minimalist quickly. A neighbor Kahdidja (Fettouma Ousliha Bouamari) joins her on a low tech road hunt. The couple meets all the chauvinist attitudes toward women and veils associated with radical Islam. In the end, the film is more about the journey than finding the husband, although along the way they heard all the horrors of the civil war.

The title of the film (having nothing to do with another film just reviewed here by that name) refers to the practice of letting male children “inherit” weapons, that at in the end get thrown into the sea.

The FRF website for the film is here. The film is in French and Arabic with English subtitles.

The other film to compare this to is Rialto’s “The Battle of Algiers” (1966, inglorious black and white, showed at Landmark E Street in 2005 shortly after the theater opened, directed by Gillo Pontecorvo).

Wikipedia attribution link for map of Algeria.  Africa used to be an important player in the “oil weapon” battle of the 1970s. But at one time, Algeria was legally part of France.
Posted by Bill Boushka at 7:21 PM