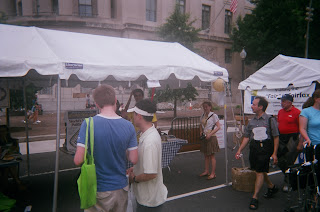 LogoOnline seems to have reorganized its website, and today I started watching James Scagliotti’s 2003 film “Living Dangerously: Coming Out in the Developing World” from After Stonewall (website ) which had made a franchise of films by that name in the 1990s.

I could only watch the first 20 minutes (out of 56) on Logo, as the server would not load the film after the second commercial break. I know that commercials “pay” for our viewing the film, but I would almost say, offer a $3 rental (like YouTube) instead. “Fortunately” I found the rest of the film in parts on YouTube, with Portuguese subtitles in English (and no commercials, which means the filmmaker loses revenue).

The Logo link for the film is here.

The film summarizes the public gay rights movement in the United States and other western countries as starting mid 20th Century (Stonewall in 1969 marks the real beginning), and notes that it got going much later, more or less in the 90s, in third world countries. It focuses early on Egypt, where Cairo had become a gay mecca by around 1995, but then authorities cracked down with the notorious “Love Boat” arrest on the Nile. Likewise, homosexuality would flourish underground in other Islamic countries as long as nobody talked about it, particularly in Kuala Lumpur, Malaysia (it doesn’t talk about Saudi Arabia, but firsthand accounts to me confirm a “don’t ask don’t tell” attitude in upper class Saudi society, out of sight of the religious police). Homosexuality did not originate in the West, but the idea of a publicly conspicuous gay culture did.

Some African countries have been particularly repressive, most notably Uganda recently, with its very draconian bill in Parliament.

Last night the Logo site greeted me with a “Short Film: Emmy-Nominated Jane Lynch Cops A Feel” which disappeared today. The 12-minute missive presented an overweight man wanting an insurance company to pay for “cosmetic” male breast reduction surgery. The “patient’s” appearance was comical, hairy but with the relevant parts bald, rather like that of a chimpanzee. At the end, the insurance adjuster wants the operation himself.

Logo seems to have removed a lot of favorite short films, such as "Bugcrush" and "Hitchcocked".
I have to say that Peter Weir’s “The Year of Living Dangerously” (1982, MGM), with Mel Gibson, Sigourney Weaver, and Linda Hunt, is one of the great ones, and it is not as unrelated (to the films above) as one would think.
Posted by Bill Boushka at 1:43 PM