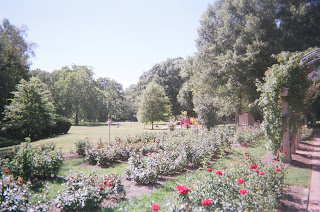 Well, “The Kids Are All Right”, but the adults aren’t any more, especially the two lesbian parents (Julianne Moore and Annette Bening), who each had a kid by artificial insemination by Paul, played by Mark Ruffalo. Trouble is, the older kid, now 18, Mia Wasikowska, ready to go to college (indeed, as “the kids grow up”) wants to meet her biological father, who gives consent, and, guess what, “moves in” on Julianne’s character as she does some “landscape architecture” of Southern California terrace lawns. Now Laser (Josh Hutcherson), is just 15 but seems the most mature of the group, a “benevolent jock” who will protect animals from bullying from his friends. The two women have raised their kids well, and what’s left to examine is whether their marriage has a future.

The insemination should not be confused with surrogate motherhood, a process used by gay male parents.

There’s a brief embedded clip of a NatGeo program on Uganda, where there is a draconian anti-gay law proposed.

The film is directed by Lisa Chodolenko, and comes from Universal Focus Features and Gilbert Films. The large auditorium at Landmark E Street on mid Saturday afternoon nearly sold out, with an audience heavily female.

The Focus site for the movie is here.

Compare to "The Kids Grow Up" reviewed here June 24.
Posted by Bill Boushka at 7:49 PM