"In the Loop": a closed British satire, obviously about how Bush went into Iraq 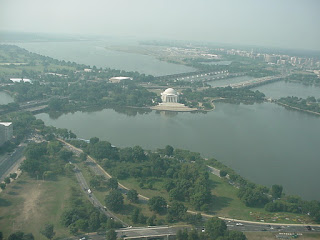 “Who are you working for?” That sort of line occurs in soap operas and mafia movies, but it seems to characterize international lobbying, as in the IFC/BBC comedy “In the Loop”, (2009) directed by Armando Iannucci.

The shenanigans start after the British and US heads of state (unnamed) decide to invade a middle east country (unnamed), and a political operative Simon Foster (Tom Hollander) misspeaks on BBC TV. Pretty soon, everybody is trying to undermine (or support) the war by sleeping around in Washington, eventually leading up to scenes where they change the grammatical structure of speeches to be made at the UN.

All of this refers, of course, to the way the Bush Administration set up the case to invade Iraq in 2003 and topple Saddam Hussein, with Colin Powell’s manipulations at the UN. I remember the night that the shock and awe started, watching it in a closed circuit TV at a private party in the Bryant Lake Bowl in Minneapolis.

The movie has lots of satirical plays on words, in a “Dr. Strangelove” style, as when Gen. Miller (James Gandolfini) says he doesn’t give up his “soldier’s license” by serving years in the Pentagon and never firing a weapon.

Sometimes the comedy is physical, as in the hotel bedroom scenes where the men are in shirt and tie and skivvies, and they already look past peak.

Technically, the film looks like a play, but it cues you in jumping back and forth across the Pond (showing a freeway with cars on the left).

The DVD has a long connected deleted scenes segment, that mentions “There Will Be Blood”.

Here is the official site for the film.
YouTube trailer from Optimum Releasing