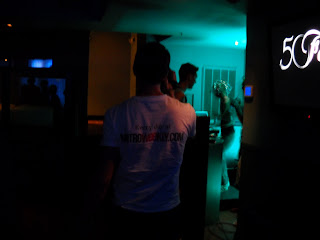 Film biography can be a good way to present certain social or political debates, and that is certainly the case with the lengthy (124 minutes) Canadian effort directed by Brigitte Berman, “Hugh Hefner: Playboy, Activist and Rebel” from Phase 4 and Metaphor Films, and apparently produced for Canadian cable television. Hefner is now 84, and plays himself, and the film jumps around with images of him at different ages, showing physical metamorphosis.

The history of how he set up the magazine in the late 50s is interesting. He raised money at a grass roots level from friends and relatives in Chicago, and had to endure a cease and desist about a different name before he settled upon “Playboy.”

But his publishing activity would be supplemented by running clubs, the first of which in Chicago simulated an “apartment”; he would break racial barriers by admitting everyone just out of libertarian beliefs. In the south, he had to deal with segregation laws. In New York, at one time he couldn’t get an entertainment license even though he had a liquor license (no problem).

He would get called before Congress during the McCarthy era, and then deal with Ed Meese during the Reagan era, with the result that Playboy no longer could be distributed through 7-11 and similar convenience stores for a while, before Meese retracted from his claim that the magazine is “pornography”. The government may well have been more concerned about the “intellectual” articles in the magazine about society and politics. (In the 1990s, I would have a letter about the military gay ban printed in the magazine.) The magazine would have many clones (Playgirl, Penthouse, and even “Oui” which once ran an article about the cattle mutilations and theories about UFO’s.)

The “brown wrapper” or “under the counter” approach to selling the magazine would foreshadow the legal debate over the COPA law from 1999 until the law was struck down in 2007.

The movie, however, barely tries to explain the “why” of the kind of “moral thinking” of the past, beyond our Puritanical origins: part of it seems to be importance of the family as a source of identity, more important to earlier generations, and some of it seems to relate to the idea that some commitments only make sense when everyone has to make them. I can remember some church sermons in the 1990s that decried the “Playboy philosophy” that saw “women as playthings.”

At Landmark E Street on Saturday afternoon, the small auditorium was about half full.

Visitors might also want to check out Milos Foreman’s “The People vs. Larry Flynt” (1996, Columbia).
Posted by Bill Boushka at 6:50 PM