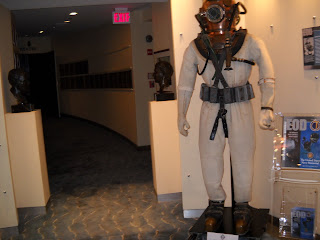 On Memorial Day weekend in 1993, I got to board the submarine USS Sunfish in Norfolk, see the living quarters and talk to the crew, during the time that “privacy” in military life was being debated in view of Bill Clinton’s proposal to lift the ban on gays in the military (resulting in the notorious “don’t ask don’t tell”). I also visited a destroyer there, and later visited an aircraft carrier at Patriot’s Point in Charleston, SC. I got used to the insides of ships, the airlock doors, and the marked paths.

The first, 20 minutes, “A Day in the Life of a Supply Officer Aboard USS Harry S. Truman”, took us through a typical day in the life of LtCm (that’s O5, equivalent to a Major) Chris Parker, on the aircraft carrier USS Truman. He calls it the “best job in the world”. The film brought back memories of my own 1993 Naval ship visits (I also visited a WWII submarine in Baltimore in November 2009).

I was quite struck by how life on an aircraft carrier is like life on another planet. It seems to be a completely closed system, it’s own Dominion. Unless soldiers and airmen (when not deployed), sailors at sea don’t have the regular opportunity to rejoin the “real world”. The job is all operations and details, but there is not the sense of dealing with transactions and currency in the familiar civilian world. Just feeding everyone is a challenge, and the men need gyms to stay fit (including Parker himself). Apparently, Parker graduate from UVA (not the Naval Academy) but comes from a Navy family.

The second film is the 38-minute “At Sea”, excerpted from a series produced by the Discovery Channel. This film does show a little bit of submarine life, but gives a bigger picture, showing how strategic Naval forces are composed. The film discusses ballistic submarines (at least six, maybe more), capable of launching nuclear ICBM’s (the film says that nuclear submarines are the last line of defense to preserve civilization, although the 1959 film “On the Beach”, (Stanley Kramer, MGM/UA) based on Nevil Shute’s novel and “Waltzing Matilda”, would challenge that), and others that can fire cruise missiles with conventional warheads useful in Afghanistan, perhaps. A good part of the film deals with the steps the Navy has taken to stop the piracy off the East Coast of Africa NE of Somalia.

I do recall seeing the 1944 film “The Fighting Lady” (20th Century Fox, dir. Edward Steichen) at Patriot Point, dealing with USS Essex. There was some surprising tenderness among the men shown in that old film. 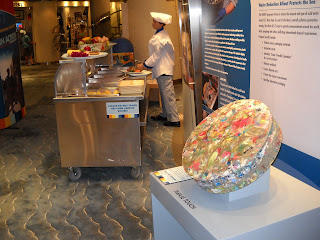