"Splice" is a social as well as biological experiment (from the good old DGC). 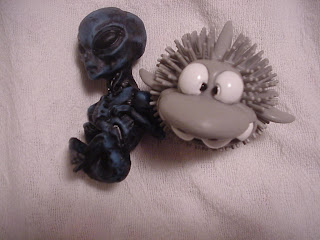 Well, the plot of “Splice” (directed Vincenzo Natali) might make more sense if Clive Nicoli (Adrien Brody) and Elsa Kast (Sarah Polley) were married and unable to have children. For all intents and purposes, they simply make one on the genetics lab, as not only a biological but perhaps social experiment.

I even recall President Bush, in 2001, about a month before 9/11, announcing his opposition to stem cell research. Maybe the film shows why.

They’ve created a couple of blobs that can actually conjugate, but then Elsa takes things further, adding human DNA to the experiment. What they get looks amorphous, a bit like a fetus (correction, normally unborn child), and who gradually grows more human in appearance and behavior, if still hairless. (They call her Dren, and her “human” realization is played by Delphine Chaneac.) She picks up language skills from Scrabble, but then starts turning into Superwoman with the ability to grow wings. Maybe man can’t fly, but woman can. (Clark Kent is a much nicer hero, after all.)

The intimacy toward the end may be predictable but shocking. Clive, who is pretty likeable (as is his brother [Brandon McGibbon]), “gets it” in bed and then comes to a tragic end, but Elsa must move on.

There's a great "magic" scene in the film's middle and, well, there is a prestige, shattering the fleeing audience.

The DGC film was made with Telefilm Canada and seems to be intended for quick cable release, shot in 1.85:1 (around Toronto, and mixed and edited in France) instead of the expected widescreen. Dark Castle is the major production company, and this appears to be a film that would have been released under “Warner Independent Pictures” had WB kept the label (it should have).

Does anyone remember Roger Donaldson's "Species" (1995, MGM) where an alien message tells how to manipulate human DNA.  Warning: it had two franchise sequels.  This film may well have sequels. (And don't forget American International's "Squirm" (1976).)

Picture: a pickled alien fetus from Roswell, NM.
Posted by Bill Boushka at 6:25 AM