"Out in the Silence": PBS airs documentary about a gay many returning to his small town during Pride Month 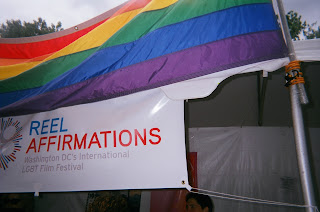 On Tuesday June 29 many PBS stations aired the Sundance Channel film “Out in the Silence” directed by Dean Hamer, shortened slightly to 56 minutes. (Note that the correct preoposition in the title is "in" and not "of".)

Joe Wilson grew up in Oil City, PA, in the rust belt in the less populated NW part of the state. Perceiving that he was gay, he kept quiet and conformed to social expectations until he left his Irish Catholic upbringing and lived as an adult in Washington DC. When an announcement of his wedding to a gay partner appeared in the local newspaper, a furor ensued, as out-of-state anti-gay groups stirred things up. Soon Joe gets a letter from Kathy Springer about the harassment of her gay teenage son in the local high school.

At first the school board is unwilling to do anything about anti-gay bullying which gets horrible. That did not happen in high school to me in Arlington VA even around 1960. Gradually it becomes apparent that opposition to gay marriage is total opposition to the presence of open homosexuals in the town at all (rather like the impression of the military). Religious groups (such as the “American Family Association”) make arguments about special rights and say that gays never had to sit in the back of the bus. But it is apparent that what people really fear is (secularized) "meritocratic" individualism, and the idea (or "logical consequence") that social familial fabric upon which many people depend will become weaker, leaving people in a poor community stranded. On the other hand, progressives in town question the reasons for the town’s “brain drain” and economic failure.

A lesbian who had been fired from a company (remember the case “DuMuth v. Miller” near Harrisburg in the 1990s?) teams with her partner to renovate a historic downtown theater.

Toward the end Wilson makes connections with a local pastor, who admits that it was wrong to harass people because of the way they live their lives, or for who they are.

See also on my "TV Reviews Blog" today (June 29, 2010) a review of the ITVS film "City of Borders" about the gay community in and around Jerusalem.
Posted by Bill Boushka at 8:58 PM