"The Other Man": when does chess match life? And what about (heterosexual) marriage "in sickness and in health"? 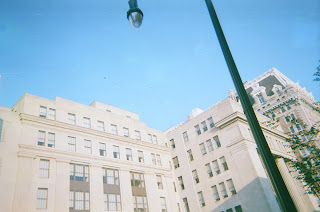 Imagine a middle aged software developer (not an oxymoron) married to a prada shoe designer, who is dying of breast cancer and who refuses treatment and accepts her expiration date, maybe because she fears her husband will lose interest “in sickness” rather than in health. But then she finds a more mundane man who will love her.

She dies, and her husband sleuths through her emails, websites, tweets, images, whatever and then flies from London to Milan to find the man who cuckolded him.

Such is the premise of “The Other Man” from Richard Eyre, distributed by Image (2008), produced by Rainmark Films in the UK and Italy, based on a short story by Bernhard Schlink. It’s a slick-looking, moody film, more in the style of suspense than just moral drama. The heart of the film is a 5-minute chess match in a Milan café, although the script really doesn’t match the analogies of chess to real life (and no, the Queens Indian Defense has nothing to do with Queen sacrifices). Stephen Warbeck’s music score has some mild touches of Bernard Herrmann, with a little polytonality thrown in.

Laurey Linney is appropriately cast as the wife (who else), and Liam Neeson as Peter is grown up enough not to seem like a Facebook kid, and Antonio Banderas as Ralph, the “other”, is aged a bit beyond the fantasies of the past. This is another good example of very professional independent filmmaking with big stars.

The film poses not only the question as to whether a woman can really love two men, but also can a many love the same woman after seeing her in a previously unknown light?