"Living in Emergency: Stories of Doctors Without Borders", premiers in Washington DC 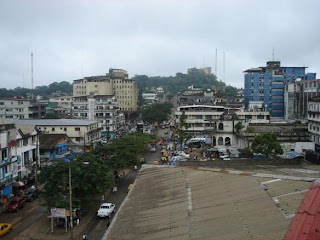 On June 4, Landmark E Street in Washington DC premiered “Living in Emergency: Stories of Doctors Without Borders”, directed by Mark N. Hopkins, from Truly Indie and Red Floor. The film was shot HD video in 2008, and (as a technical note) the film does not display the subtitle when shown.

The documentary traces several young doctors in two areas: Liberia, and the Democratic Republic of the Congo. Liberia experienced a civil war that ended in 2003. Congo is well known for human rights abuses.

“Doctors without Borders” (or Medicin sans frontiers), headquartered in Paris, actually accepts only a small percentage of applicant physicians, who are given room and board and paid only a small stipend.

The main “real people characters” are Chiara Lepora, Chris Brahser, Tom Krueger, and Davinder Gill. Kreuger comes from a farm in Tennessee, which is shown in its green splendor; Chris Brasher becomes the “cigarette smoking man” (that’s depressing), but the most interesting of all is the wiry young man from Australia, Dr. Gill. Much of the film acts out his personal crisis in relating to other members of the team dealing with certain issues in providing care. Gill is physically attractive and charismatic in an eye-popping way, and one is amazed that this is not an acted performance; it is “reality movie making”. Gill has become a pediatrician in Australia since leaving MSF.

The film shows spectacular footage of both urban and rural Africa, and takes on real depth in scenes with motion. The squalor in the shantytowns is almost unprecendented.

The film also shows the surgeries, including amputations, up close in graphic detail. Doctors have to improvise medical equipment, and don’t seem to follow the strict infection control rules for full scrubbing before surgery as expected in the West.

The website for the film is here.  It has shown at the Venice Film Festival, won a prize at the Cinequest Film Festival, and become an official seltection of Hot Dogs, the Doc Soup Series.

A member of MSF, on a fellowship at NIH, answered questions Friday night at Landmark E Street, which was about 2/3 full in a small auditorium.

IMDB lists a similar TV movie (“Living in Emergency: Stories of Doctors Without Borders Live”) directed by David Stern hosted by Elizabeth Vargas (from ABC 20-20) and NYC author Sebastian Junger, who has written about the civil wars in nearby Sierra Leone (see Vanity Fair reference here.)

I did see the film “Beyond Borders” in 2003 (( Paramount and Mandalay, directed by Martin Campbell, written by Caspian Tedewll-Owen) presents a rather traditional love triangle in the overriding context of relief work in the Third World. Angelina Jolie plays Sarah Jordan, the UN employee who becomes drawn into jetsetting the poor areas of the world, such as Namibia, Cambodia and then Chechnya because of her attraction to doctor Nick Callahan (Clive Owen) who seems to be dedicating his life to medical relief for the poor. Or is he, as he gets drawn into local political intrigues? In the meantime, her rather plain husband Henry Bauford (Linus Roache) tolerates her jaunts in insipid fashion.

Wikipedia attribution link for picture from Monrovia, Liberia, originally from World66.com
Posted by Bill Boushka at 8:26 AM