"The Kids Grow Up": a documentary filmmaker tells the story of his own emptying of the nest 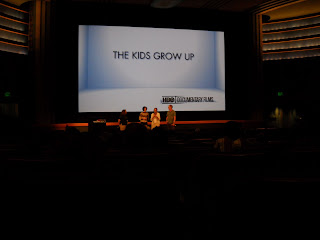 On Thursday June 24, 2010 the AFI Silverdocs showed the family documentary “The Kids Group Up”, directed by Doug Block. (For some reason the director’s name and manor reminds me of Douglas Sirk!) The film will be distributed in theaters soon by Shadow but was produced in part by HBO Documentaries (and Copacetic Pictures) and should appear on HBO in early 2011.

Block documents his own only-child daughter’s rearing in New York City (with trips to family homes on Long Island) and her going away to college in California. At one point, the daughter expresses indignation about being “exploited” by her documentary filmmaker father, but then welcomes the idea with a Father’s Day cell phone call. This film is a second in a planned trilogy about Block’s family: the first was “51 Birch Street”. The film, which tends to focus on family emotional intimacies (as if a kind of “Sinfonia Domestic”, after the famous tone poem by Richard Strauss) also shows the mother, a law professor, dealing with clinical depression, and his father receiving care at a home in Florida.

I can imagine treating my own “do ask do tell” material this way, especially the period through my high school graduation to my going down to William and Mary in September 1961 with my parents, and my expulsion for homosexuality in Nov. 1961, and what would follow for the family. I discuss this on the BillBoushka blog on Nov. 28, 2006. That’s one indication of how books and movies about one’s family become a sensitive matter. Mine would certainly have a very different and more challenging emotional tone than this one. But the family dynamics of dealing with a teen’s homosexuality, especially in a more conservative family (or in the past when social attitudes were often much harsher) does seem like a good topic for PBS/POV or HBO documentary filmmaking.

In this film, the daughter goes to the high school prom alone. I did not go at all – my Mt. Washington NH trip with the Science Honor Society became the psychological equivalent of a prom; I do recall a “pre-prom” party two weeks before and not liking the jazzy music. I don’t remember my commencement ceremony well, or the valedictory speech; the film shows a bit of the daughter’s.


The Kids Grow Up longer trailer from Copacetic Pictures on Vimeo.
Posted by Bill Boushka at 4:11 PM