"A Film Unfinished" embedded in a documentary about the Warsaw ghetto 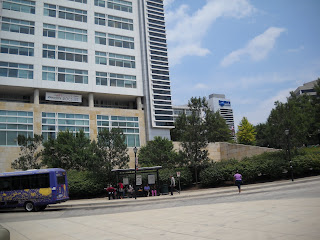 AFI Silverdocs presented the encapsulated documentary “A Film Unfinished”, directed by Yael Hersonski (87 min) today (June 22) at a well-attended weekday show in the large auditorium. The film seems to have commercial distribution from Oscilloscope.

The enigmatic title may suggest Schubert’s Unfinished Symphony – and in fact there is a poignant quote from Brahms’s First Piano Concerto in the score. The moody chamber music score sounds like a mixture of Britten and late Shostakovich – I don’t have the composer.

The “embedded” film was a propaganda documentary which Nazi filmmaker Willy Wist was making of life in the Jewish ghetto in Warsaw around May 1942. The film was going to make it appear that the Jews were well-fed and morally responsible for their own disparities between rich and poor. Wist would eventually give up filmmaking and become a steelworker (a “prole”) in order to distance himself from Nazi activities for the post war trials.

The inner footage, which is always grim, is in black and white and usually small aspect; the outer documentary is in muted colors and regular full screen. Gradually the life in Warsaw gets more desperate, while the Germans tried harder to make them film their intimate life even more, such as a circumcision which they order done in an apartment rather than a hospital.

Silverdocs has a blog entry on the film here.

I couldn’t find a trailer for the film, but here is a YouTube video by RelatioNet on the Warsaw Ghetto wall.

The book “War and Remembrance” by Herman Wouk and ABC television film series presented the “Paradise Ghetto” Theresienstadt in Czechoslovakia.

The film was preceded by an 8-minute hand animated short, “An Overnight Stay.” An 83 year old woman recalls a cold night in 1941 Warsaw when strangers took her in. Multiple families were placed in single rooms. But when she went out for a moment, she saw Germans who might report her, and, to protect her mother and sister, she could not come back. She got taken in again. The film is directed by Kamil Turowski and is based on a short story by Slawomir Mrozek.

Silverdocs is presenting a 1996 French film, “Microcosmos”, by Claude Nurisdany and Marie Perennou about insect life, which I believe I saw in the Nemo museum in Amsterdam in May 2001. It had an impressionistic music score.
Posted by Bill Boushka at 5:32 PM