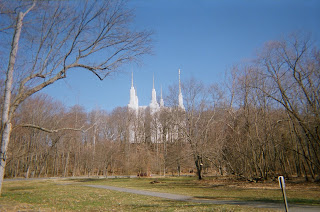 The AFI Silver theater in Silver Spring, MD is showing the documentary “8: The Mormon Proposition”, directed by Reed Cowan and Steven Greenstreet, from Red Flag Releasing, for three days this weekend as a prelude to its Silverdocs festival starting this week. It’s not part of that festival officially (since it already has commercial release), but in a practical sense it is.

The film does create the impression that the intense lobbying effort in California by the Mormon Church, the Church of Jesus Christ of Latter Day Saints, to pass Proposition 8 in the November 2008 election. This measure was a state constitutional amendment to define marriage as between one man and one woman and overturn a state supreme court ruling earlier in 2008 declaring a law saying the same to be unconstitutional.

It’s clear that in the eyes of the Church and the filmmakers both, the battle over gay marriage is a proxy for gay rights in general, for the rights of gay people to live their own lives without infringement or even expropriation from others. And to make this point, the filmmakers settle in on the pressure that the Mormon Church put on ordinary members from all over the country to give money to their Proposition 8 campaign. “Checks should be from individuals” one letterhead reads.

The Church is an authoritarian organization, much more so than even the Vatican. According to the film, members who didn’t give were threatened with excommunication.

Authoritarian structures do provide stability sometimes, while creating a world that has no use for some kinds of people. Freedom, and in general democratic capitalism as we know it, has to accept some risks to allow for more individual diversity. As a result, social structures like the family do remain important anyway.

But the Mormon Church, according to the film, seems to have a particular problem with homosexuality because same-sex eroticism threatens its theology based on everlasting marriage and the permanent natural family. (Paul Mero, one of the co-authors (with Allan Carlson) of “The Natural Family: A Manifesto” (my Books blog, Sept. 18, 2009) in one scene publicly scowls at gays for thinking its their right to do anything they want with their own lives!) According to the film, Mormons believe that in the next life, polygamy (which at one time was practiced by Mormons in the US) will be followed and that men who had faithfully raised families (and practiced marital monogamy) would own their own planets in other solar systems or universes. Men would become gods, and gays threatened their future as gods! I wondered if there would exist a spiritual “subprime mortgage” and for other solar systems as real estate, or maybe even for black holes (which some physicists say can generate whole new universes in countably infinite fashion). The animation depicting Mormon ufology was rather entertaining.

It’s obvious that the Mormon campaign raises legal questions about the separation of church and state, which the film explores by probing the Church’s statements on its “campaign contributions”. It could invoke the controversy over campaign finance reform that erupted after McCain-Feingold in 2002. But a deeper question arises as to an undue influence on the political process in our country. It can come from a church, or from employers. I wouldn’t have much to offer in a world in which all policy decisions were made by orchestrated and coercive lobbying. But there’s a flip side: if one has a disproportionate influence on externals through Internet self-promotion without being connected to the needs of others through community or something like the “natural family”, then there occur a different set of “Moral” issues.

The film focuses on gay Mormon youth, depicting some particular gay couples in California (interspersed with interviews with San Francisco mayor Gavin Newsome who was so supportive of gay marriage, while a straight Irish Catholic himself). Gradually, it moves into the disturbing topic of suicides of gay youth in the LDS. It also depicts Mormon aversion therapy, and depicts old footage of lobotomies, calling to mind scenes from Martin Scorsese’s “Shutter Island”.

The 2003 film “Latter Days”, directed by C. Jay Cox (FunnyBoy Pictures and TLA Releasing) had depicted the life of a gay young Mormon missionary, and with the consequences of his outing (including aversion therapy), and a brilliantly written confrontation scene with his mother (back at home in Idaho), who so badly needs her son’s compliance with the heterosexual Church model for life for her own marriage and motherhood to mean anything. (At one point, she challenges him with something like, “What about me then? Where do I fit into your world?”

However the 2000 film “God’s Army” from Richard Dutcher and Zion Films had presented the LDS version of mandatory male missions. And the film “September Dawn” (2007, Slowhand, directed Christopher Cain) had depicted a 19th Century massacre by fundamentalist Mormons or ordinary pioneers.