"City of Ember": an artificial community anticipates the lights going out 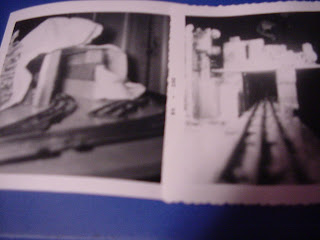 The notion that a confined, artificial space, like an oversized model railroad, for people to experience a whole civilization in, has always interested me.

So the children’s sci-fi fantasy “City of Ember”, directed by Gil Kenan, from Playtone, Walden Media and 20th Century Fox (2008) attracted me because of the “political idea” and the idea of controlling a whole civilization’s space. In this case, the planet has encountered a civilization stopping catastrophe (apparently involving nuclear radiation), and the wise men have built an underground city for the survivors, called Ember. It’s a place with niches and its own character, rather like an Imajica dominion. The “mayors” have hidden away the instructions for returning to the ground for 200 years, and in time the box gets lost (and this is not something out of a Richard Kelly movie). The very opening scene of the film, with people in blue uniforms assembling in a white hall (in 2.35:1) gives you a sense of what civilization confinement can mean.

The city is beleaguered by monsters, like overgrown moths and caterpillars, apparently enlarged by radiation, so there is a slight element of monster horror in this PG-13 film. And it’s up to two super teenagers (Lina (Saorise Ronan) and Doon(Harry Treadaway) to find the way out, after Lina finds evidence of the box in her grandmother’s “house”. These are the kind of kids that populate Smallville, that every parent would want, but would hard to be conceive of in a civilization with no future – despite the collective singalongs.

The way out has elements of “Goonies” and even “Indiana Jones” – it’s by a complicated set of underground waterways (almost Jules Verne-like) – as the kids emerge onto a British (or northern Ireland, actually) landscape of “life after people”.

The main thrust of the story is kicked off by cascading power failures of increasing length. The City’s centuries-old generators are starting to fail, and the knowledge of how to fix them is gone. Imagine a weeks long power failure in the winter if hackers destroyed our power grid, an idea that security experts like Richard Clarke worry about. The next time Dominion Power has a power failure at all, I’ll think of this movie.

There are other films based on the “confined community” concept, such as “Dark City” (1998), Tribeca’s “Metropia”, and even the recent “Synecdoche New York” (Ember seems like a kind of synecdoche) and even “We Live in Public”. Ironically, a civilization contemplating space travel will have to grapple with the social issues thereby presented.

I’ve contemplated the idea in a couple of my own screenplays, including “Baltimore Is Missing” (where people find they are living inside a model railroad) and “Prescience” (where on an M-star planet a synecdoche has been set up for abducted earthlings to adjust in).