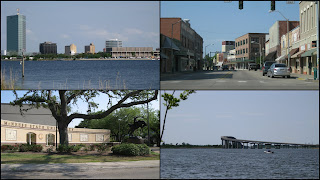 Last week CNN aired “Toxic Towns USA” (part of the series "Toxic America"), about industrial pollution and the small unincorporated town of Mossville, LA, near Lake Charles, with Dr. Sanjay Gupta, which I reviewed on June 3 on my disaster movies blog “Films on major threats to freedom” (check my Profile). I found out (from Wikipedia) that there had existed an older comic documentary made back in 2002 by Daniel B. Gold and Judith Helfand, “Blue Vinyl: The World’s First Toxic Comedy” from New Video and Docurama (“everything else is fiction”). Yes, the title does echo David Lynch’s “Blue Velvet” (1986).


The film chronicles the health hazards of the byproducts of plastics (particularly PVC or polyvinvylchloride) manufacture, to residents and workers, especially in the Lake Charles, LA area, of which a lot of footage is shown. One important issue is not just the potential hazard of a product to consumers, but to the people who produce it along the way. A worker describes how powder got on his hands and skin and how it remained white after it was washed off. The filmmakers go to Italy to cover a manslaughter case involving a PVC manufacturer.

Judith’s parents had put blue vinyl siding on their home, which toward the end of the film they replace with wood siding. Judith had experienced a hysterectomy at 25 because of cancer she had gotten apparently because of a drug her mother had taken, so she had won a settlement and could afford to involve her parents in her activism, including the changes to the parents’ home.

The websites for the film are “Your Is Your House”, here  and the actual film an animation site here.

If PVC-free building becomes the norm, what happens to the value of houses built with a lot of PVC products?

The DVD has an Epilogue: “Ek Velt: At the End of the World” (17 min), where Judith’s parents sadly sell and move from their organic house to a retirement community on Long Island, one “contaminated” with vinyl. ,

There is a 10 minute short “Animating Blue Vinvyl: An Interview with Emily Hubley and Jeremiah Dickey”, where the animation demonstrates the “externalization of costs”.

There are four other shorts:

“Habitat for Humanity” (13 min), builds a PVC-free house in New Orleans (with Greenpeace) for Shylia Lewis and her family. Healthy homes shouldn’t be a privilege for the wealthiest people.

“Venice Vinyl Verdict” (6 min), giving the results of the trial in Italy, apparently not guilty of manslaughter, resulting in indignation and outrage from the crowd.

“Carnivale” (6 min) shows Venice with pre-trial debate. The filmmakers had to find tourist shots of Venice with industry in the background. 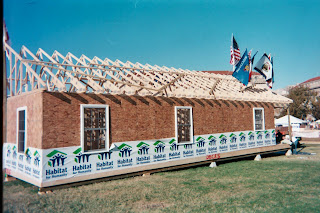