"Before and After": Justice drama with Meryl Streep and Liam Neeson from the 90s 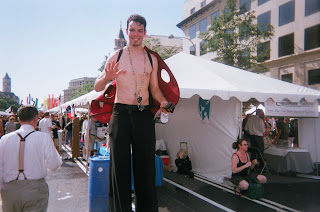 
In the film directed by Barbet Schroeder, a family (Liam Neeson is pop, and Meryl Streep, looking younger, plays a female doctor) is confronted with their teenage son’s being accused of killing his girlfriend when a policeman, out of uniform, rings the doorbell one evening.

In terms of screenwriting, the film presents a clear cut dilemma, and crisis, and the story follows (in “beginning-middle-end” format) in straightforward, “American Hollywood” fashion. The post-romantic music score by Howard Shore sprinkles us with dissonances just when the camera is going to raise the tension level.

There is a twist, of course. It was an accident. But she was pregnant. And because of the contrivances in the American justice system, no one, including the boy (Edward Furlong) can afford to tell the truth – otherwise there is no movie.

Like many genre dramas, the film seems to have an “anywhere” location (the fishing huts suggest Minnesota) but pretty soon we’re pretty well established as being in Massachusetts.

The film comes from Hollywood Pictures (with its Sphinx trade dress), which Disney uses off and on for quasi-independent genre films, similar to Sony’s Screen Gems.

I do recall seeing a teen Ed Furlong in Charles Matthau’s film of Truman Capote’s quaint story “The Glass Harp” from Fine Line in 1995, where Ed plays the character Collin Fenwick.