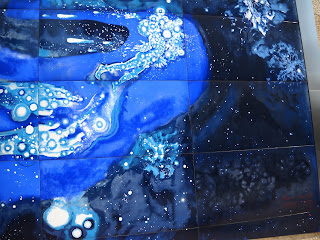 AFI Silverdocs offers a few free “shorts programs” (not the cargo shorts kind), and today I saw the “Creature Comforts” program, and a couple of the films are important.

The program led off with “Upside Down” or (in Czech) “Arsy-Versy”, 23 min, from director Miro Remo. Set in Slovakia, the film explores an inderdependent relationship between mother and son.

The son, Lubos, now around 50, lives with his mom (or mother), and pursues his solitary, "vicarious" hobbies, studying butterflies (OK, there’s Tiny Tim’s “OGAB”), and most of all, bats. In a number a scenes, he explores the caves in which the bats live, that seem to be old mines (perhaps coal mines), along a mountainside that is slowly being blasted away (is this a message on mountaintop removal?)

His aging mother, probably in her 80s, expresses concern over what will happen to him when she is gone. She wonders why he doesn't get a real career (like at a local cement factory or perhaps coal mine) -- say a "real job" (even manual labor) while biology is his hobby. You could have said that about my piano "pre-career".  She does not seem disabled or in need of any long term care, so the potential for a film like this to get into eldercare issues isn’t fully explored. But one wonders why the son remained “dependent” (perhaps even a “mooch”). There are some psychic clues. First, the music soundtrack takes off with MGM/2001’s rendition of the opening of Richard Strauss’s “Thus Spake Zarathustra” and later J. Strauss’s “Blue Danube Waltz”, whereas Lubos is going upsidedown, exploring life underground rather than in space. (You wonder if astronaut would be a good occupation for a loner!) But there are some quick shots of him physically, especially as a younger man (flashback), such as one in which a shirt is being pulled off, which suggest a certain modesty and lack of normal male confidence and competitiveness. We could go into the Freudian or even oedipal matters more. Yet, one has a certain empathy with Lubos; he is studying and documenting things not too many people want to pay attention to.

In fact, in earlier generations, “non marrying kind” people (usually women, like the "old maids" in "Gone with the Wind") were expected to hang around home and be prepared to play or provide family for their aging parents (you could imagine a short film called “Family Slave”). In today’s world, of fewer children, and longer life spans (often with considerable disability for some years at the end of life), we have issues that we didn’t have before. We should be discussing them openly. I am in a situation somewhat like Lubos, but more challenged (and I need more independence again), but the situation of unmarried adult children, even men, living with their mothers (without much social controversy) is more common in my experience than one would expect.

The soundtrack of the movie sounded monaural, and a bit tinny. Many of the flashback scenes were in black and white, and that made them more effective.

The other “big film”, at the end of the program, was just as “controversial”, maybe even more obviously so. The film is “A Moth in Spring”, directed by Yu Gu, from Canada and China, 26 min.

A young woman living in the inland metropolis of Chongqing endeavors to make a film about her father’s involvement with Student Democracy Movement of the 1980s, ending in the Tiananmen Square Massacre of 1989. The film intersperses rehearsal or filming sessions with bits of text from her screenplay in FinalDraft format (as if this were a film about screenwriting). But then the Chinese authorities find out that she is making a political film about the democracy movement and raid her apartment and take her materials. Yet, she is able to leave the country with footage of the raid, which she can use to make this film when she gets to Vancouver. The filmmaker was present for the Q&A afterwards.

The other three films were smaller and more obviously “about” animals.

“Big Birding Day”, directed by David Wilson (13 minutes), depicts competitive birding in Oklahoma and then Mexico. I knew a birder in the LGBT outdoor group “Adventuring”, and I’ve seen practically everything once: bluebird, goldfinch, bunting, red header woodpecker, oriole, ovenbird and various other warblers (and red wing blackbirds near water).

“The Poodle Trainer” (8 minutes), directed by Valance Malone, has a favorite show dog in a colorful Russian trepak.

“The Herd” (4 minutes), by Ken Waldrop, set in Ireland, has a fawn making her way into a herd of cattle, not necessarily wise. She is not “Babe”, but the Herd is no “nerd herd”.