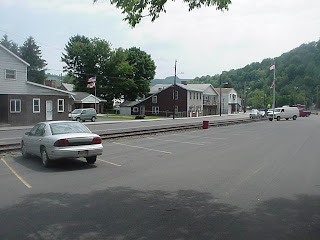 
The site for the film is here. The YouTube link for 24-hour online rental ($5.99) for YouTube account holders is here. Netflix shows the film in the Save queue.  You can check the film schedule from Tribeca against YouTube and locate those available for online rent (at least ten of them it seems).

The film is a montage, jumping back and forth between several scenarios: Mumbai, India; a West African Country; Papua , New Guinea, and most of all Kayford Mountain area of West Virginia where the film documents the most impressive footage ever of the blasting that goes on with mountaintop removal. There a demonstrations in Washington DC where “hillbillies” from Appalachia say that they will no longer live as “collateral damage” for American cheap energy. Over 470 mountaintops have been removed in West Virginia, with the cuts of over 1000 feet in a few places. The poetry talks about guillotines that behead hills, as if the countryside were being depilated (we could say that about logging, below).  They valley streams are covered up and polluted with toxins like selenium.  The film also has a brief history of underground coal mining.

In Africa and Papua, the main issue is logging (the Amazon would have made a good site). In Papua in some areas large commercial logging companies are never allowed. In Africa there is a demonstration of solar stoves; but why are the developing world countries being expect to take up the slack on renewable energy.

In Mumbai schoolboys talk about controlling plastic waste, as does a public affairs spokesperson in London, who wonders about the plastic containers on her beauty items. In some areas of Mumbai there is one toilet for a thousand people.

Picture (mine): Barton, MD, near a strip mine.
Posted by Bill Boushka at 8:22 PM