"The Swimsuit Issue": a gender-bending comedy from Sweden at Tribeca 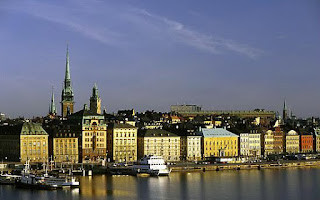 “The Swimsuit Issue” (“Allt Flyter”), from Sweden, is a slick comedy offered for rent at the Tribeca film festival on Youtube. The rental link ($6) is here.

The film, directed by Mans Herngren, tracks the adventures of nine men who want to represent Sweden in the World Cup in figure swimming (and “floorball”), normally a “women’s sport”. The idea is born at a rich dame’s party, and much of the comedy has to do with the reaction of wives and girl friends. Their journeys take these straight men through a gay pride parade (the credits say its Stockholm Pride) on the way to the final “competition.”

The men, largely in their 30s and 40s, are varied enough in appearance. Except for one comic moment, they don’t shave (even in Sweden, that could have become necessary).

On my XPS laptop, it looked good (almost like BluRay) in 700 HD (the highest setting did not work).

The English title of the film does bring to mind "The September Issue", which was a totally different concept.

Fladen Film and Nordisk were among the production companies, and Tribeca is listed as the theatrical distributor. I would expect to see Sony Pictures Classics want to look at this one. In very clear Swedish with subtitles.

Wikipedia attribution link for Stockholm picture here. I visited the city in August 1972 (on the way back from Kiruna).
Posted by Bill Boushka at 6:35 PM