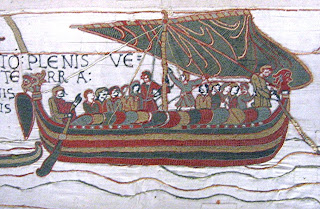 While “Robin Hood” has become the anti-thesis of libertarian values – the redistribution of wealth by force – the Ridley Scott movie is relatively apolitical, even if there are stirring scenes involving the ideals behind the Magna Carta. Rather, it tells the story (as screenwritten by Brian Helgeland) of the archer in Richard the Lionhearted’s crusades who eventually became the legendary leader of the Merry brood in the woods around Nottingham.

There’s really a lot of complex plotting, as when Robin Longstride (Russell Crowe) pretends to be the husband of the widowed Marion Loxley (Cate Blanchett) so she can get her land inheritance (she lost her husband after a week when he went to the Crusades). There’s also the idea, a King John’s coronation, that people owe the taxes of their parents (John recognizes that by asking Robin where he’s from, rather like people are asked in Army Basic). John is played by Oscar Isaac, who makes his artificial self-righteousness likeable enough, like someday he will listen. And, one early scene establishes him as “smooth”, as if that foreshadowed his behavior.

This film does come across as a European History 101 lesson. It’s intricate and detailed in a way that a history lecture might be.  1200 AD England was a grimey place, not fit for spoiled moviegoers to live in. But detail seems to be Ridley Scott’s forte as a director; we know that from his movies in modern settings, as well as television series like “Numb3rs”.

Universal’s (and Image Entertainment’s) website for the film is here. This time, as Universal’s trademark played, I wondered how the effect would come off if Earth were replaced by Jupiter while the Valkyries theme plays.

King John makes a bizarre statement about the idea that his kingship is a divine right from God, which could justify anything. Sure, the divine right of kings -- couldn't protect them from barons and nobles with enough knighthood power in feudal society.