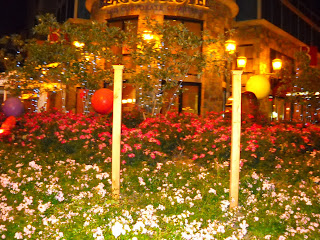 The comedy film “Please Give” – an ambiguous title that sounds like a beg (or maybe it reminds me of Oprah Winfrey's "The Big Give" reality show a couple years ago on ABC) – was a hit at Sundance and, even though it is domestic, is being touted as directly from Sony Pictures Classics (why not Screen Gems instead?) Written and directed by Nicole Holofcener, it really does probe (and sometimes satirize) our experiences with trying to “be good” for the sake of claiming moral virtue. That is, we can give to others or volunteer on our terms, but not be willing to “join” with others in some kind of fellowship in their reality. We wind up not helping them, maybe humiliating them further. If you talk about “giving” it’s really hard to actually do it.


The story concerns a middle-aged Manhattan couple (Catherine Keener and Oliver Platt) who sell items previously owned by people who have deceased. They have a rebellious daughter Abby (Sarah Steele) who wonders why mom won’t buy her jeans and feels that mom’s gestures to help the homeless on the street are empty. The vacuum of mom’s “outreach” becomes a major theme in the film.

The couple buys an adjacent apartment for a later add-on, but only after the 91-year-old woman living there passes. That certainly seems grating and a morally controversial position to put oneself in, but this introduces the subplot of the two granddaughters: Rebecca (Rebecca Hall) who joyfully cares for her while working a day job doing mammograms (the movie opens with a sequence showing them explicitly and a song making fun of physical missing parts) and Mary (Amanda Peet) who works as a cosmetologist. One thing is that it is not really clear how much help grandmother (Ann Guilbert) really needs (that could really have made this a movie about eldercare, but it doesn’t go as far as it could in that direction), but Rebecca seems to have given up her own life, whereas Mary sees such a “sacrifice” as subservient and irrational. Rebecca, however, meets a nice young man Eugene (Thomas Ian Nicholas, who looks and talks so much like David Krumholtz from CBS’s “Numb3s” that it fooled me – would Charlie Epps from that show be the perfect catch for Rebecca?); later the movie makes something of Eugene’s being shorter than Rebecca. (As for Nicholas’s acting, he might well consider the idea that it does so closely match that of another popular actor and character; maybe his agent would want a more distinct personality.) Mary, on the other hand, gets taken down, and called a “stalker” and “loser” when her voyeurism goes too far in one random scene.

Holofcener’s writing is witty, even brilliant, and her view of charity (as in I Corinthians 13) is subtle and refreshing. Charity is a concept in all major religions (at least Christianity, Judaism, as here in the film, and Islam). But it should not replace the concept of self.

The website for the film is here.  Read the director’s statement on the website.  (Sony Classics opens the specific film websites in new windows.)

This film is indeed a "screen gem".  It almost looks too big at 2.35:1 aspect ratio. The late Saturday screening at the AMC Shirlington in Arlington was about half full (large auditorium) and the audience liked it. "AMC Select" has been replaced with the new "AMC Independent" trademark.

One other thing: I love AMC's own "introduction" showing an outdoor movie theater on another planet (the blue vegetation suggests an M-Star planet). There's even a distant city. There's a pretty good chance that something like that exists within 50 light years or so of Earth.
Posted by Bill Boushka at 9:26 AM