Lifetime film "To Be Fat Like Me" examines what filmmakers go through, as much as it examines social prejudice 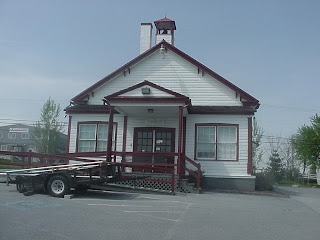 An ambitious teenage girl Alyson (Kaley Cuoco) is the star of a high school fast-pitch women’s softball team (that says the high school is well off, doesn’t it) and then hurts her knee sliding into second base to break up a double play. She has been trying to go for an athletic college scholarship, a real plus for women’s sports; her family has no money to send her because her mother spent the family’s savings being treated for bulimia. She blames her Mother (Caroline Rhea) for lack of “personal responsibility” and says she speaks “the truth”. Her dad (Carlo Marks?) has the job of maintain family cohesion against the demands of individualism. Her nerdy kid brother is already the target of bullies because he is overweight and physically behind.


So, she comes up with another gig. An English teacher comes up with the idea of making a documentary film for a term paper (high schools can do that now; that happened when I subbed). She decides to put on the heavy makeup and a foam fat suit, go to summer school and take AP biochemistry, wear a hidden camera and make a documentary of the kids’ reactions. She thinks that her engaging personality will win her over, but she is in for a lesson in “real life”.

Such is the premise of the (Canadian) Lifetime Channel and Ardmore Productions film “To Be Fat Like Me”, directed by Doulgas Barr.

Even the AP kids are nasty (one calls “Moo” to her); in real life, when I subbed, I found that they would never be; they were wonderful. But gradually, she makes friends. One particular guy (I think it was Kyle, played by Richard Harmon) is particularly spectacular (rather resembling Tom Welling), and says he still likes her as a friend but would be turned off romantically if she really was overweight.

Toward the end, her Mother finds out about her “secret” film project and resents the idea that her daughter is really making a film about her!

Is this movie really a film about filmmaking and what actors go through (makeup) to become other characters? It is; the makeup and fat suit are amazing. It’s more about expression than it is about social attitudes concerning obesity.

The script mentions the book "Black Like Me" by John Howard Griffin, which was another experiment at a masquerade; that book also got mentioned in Joe Steffan's "Honor Bound."

The entire 2007 film is available in pieces on YouTube from OldSchollGuy2619.