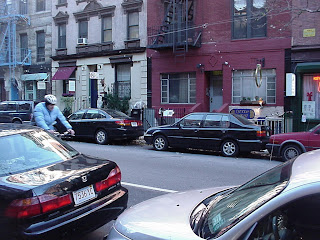 Thursday May 27 ABC presented “Hollywood salutes Matt Damon: An American cinematheque tribute”, link here.
The funniest moment may have occurred when Ben Affleck’s wife Jennifer Garner referred to Matt as her husband’s husband. Morgan Freeman made some oblique references, and Matt himself said that Casey Affleck (in the tragic desert hike in “Gerry”) was “almost” like a brother to Ben.

Okay, they wrote “Good Will Hunting” together, and Matt insists that the original screenplay (probably in Screenwriter from Project Greenlight later) is on his home computer today (probably a Mac), apparently a townhouse in the East Village. Seriously, Matt Damon once told Barbara Walters that he moved into his New York City home late the night before 9/11, which provided the first image when he logged on to his computer the next morning.

“Good Will Hunting” (1996), from Miramax and openly gay director Gus Van Sant, told the story of a hidden genius (played by Matt), working as a janitor, struggling to keep his gifts from being misused. There is a brilliantly written scene where he confronts the fibbies trying to hire him. Affleck plays Will’s best friend, and hairy Robin Williams plays the therapist.

Damon is 39 now, but he definitely looks older than he did in his first movies. He looks appropriately gaunt in “Courage under Fire” and asks “why me” in reverse in “Saving Private Ryan”.

The show presented excerpts from all the “Oceans” movies, where Matt’s best line was “smash and grab job”. Oceans 11 simulated an EMP attack, although incorrectly, in Las Vegas, throwing all the lights out for a moment (in reality they wouldn’t come back on).

There is also a play "Matt & Ben" by Mindy Kaling and Brenda Withers, performed in Adams Morgan at the DC Arts Center a few yars ago (at the Accokeekcreek Theaterco).
Posted by Bill Boushka at 7:52 PM