"Far Cry" is a stereotyped takeoff on the video game 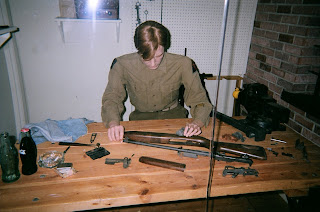 “Far Cry” is the first film that I have come across from the list under litigation by the “US Copyright Group” over P2P sharing to have been released by what is regarded as a major studio, Disney’s Touchstone Pictures, in 2008. The DVD comes from Vivendi (which implies some ownership by Universal), and it strikes me as comical that a potboiler like this (directed by Uwe Boll (DGC)) gets to be the subject of so much legal attention. The production company is Brightlight, reasonably well known.


The film itself is a meeting of “Dr. Moreau” with “Universal Soldier” and perhaps “The Most Dangerous Game”. But that’s saying too much, as the film is a takeoff on a popular escapist video game.

Udo Kier plays the mad scientist (Krieger) hired by the government to develop the perfect soldier on an isolated Pacific island (for our CIA, it seems). OK, it has a hairless body, and pretty much behaves like a golem. Krieger enjoys listening to Wagner’s Parsifal (on an LP record, nonetheless).

Two reporters (Tom and Valerie (Emanuelle Vaugier)) take a boat to the island to “keep them honest” and test how dangerous journalism really is.  Valerie claims that the government denies that is has anything going on there, despite the bald Sasquatch rumors.  Til Schweiger plays the game character Jack Carver, who is supposed to act as “escort”. The movie, which started with a demo of the clone soldiers on a maneuver and “spoils” things immediately by introducing Krieger’s project, pretty soon erupts into endless chases and special effects.

The DVD has a featurette that explains how the CGI shows the bullets bouncing off the mutants as if their skin were bulletproof.  There is an early scene where Krieger shoots one of the mutants to make the point.

The official site for the game is here.