"City Island": how to build a movie out of an audition 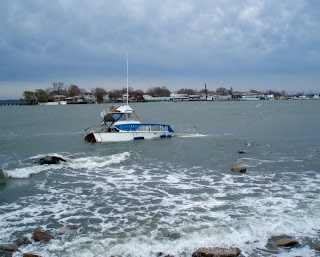 Sometime around 1975 while living in NYC, I took the IRT #6 train to Pelham Bay and bus to “City Island”, so I knew what it was when I saw the ads for the film by Raymand De Felitta.

Indeed, it’s a situation comedy, of sorts, about a dysfunctional family (like “Little Miss Sunshine”), but what really works is that the corrections officer Vince Rizzo (a grizzle and gray Andy Garcia, a sort of reduced Alec Baldwin with a touch of “Lost City”)) tries out as an actor (taking a class from a teacher played by Alan Arkin) in a Martin Scorsese film (apparently “I Heard You Paint Houses”; their last collaboration was “Casino” with its vice crush scene). The audition scene, with the behavior of the casting directors, is quite interesting.

That gets him in a league with a female casting director (Emily Mortimer) and a showdown with his wife (Julianna Margulies).

But the acting class (there was such a class at the Ninth Street Center in NYC back in the 1970s; and I attended one in Minneapolis in 2002, actually getting to try out for a horror flick named “Retreat” and almost getting the part of a ghost) generates another story line. Vince has to tell a partner a deep dark secret so that the partner can do a monlogue on it (we actually tried something like that in Minneapolis (try Mntalent). The result is that he reveals he had fathered a young man now in prison, so to earn good karma he gets the guy (Steven Strait) out on parole and invites him to become part of the family at his beachfront City Island home. There is also the chubby chasing (but himself slender and attractive) and pesky teen (Ezra Miller) enjoying his voyeurism on the computer, spreading to the family.

Now, it’s almost a tautology that a man played by Andy Garcia would get the part at an audition. One of my own scripts called “Make the A-List” (2003) actually starts with a hidden audition scene in which a past trauma that had affected the casting director is ad-libbed. It (the concept) went over fairly well in a screenwriting seminar in Minneapolis. It’s good to see it done in a “real film”.

The main production company for this “Made in NY” film is Cineson – but Warner Brothers is credited, and the music was edited in Poland. Why does Starz use its old video brand “Anchor Bay” to release this film instead of “Overture Films”?

The site for the civic association for the real place is here.