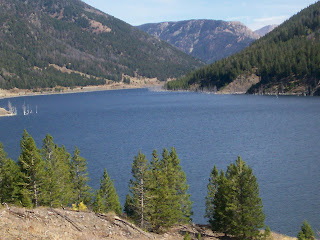 “Call of the Wild 3D”, directed by Richard Gabai, screenwritten by Leland Douglas and adapted from the novella by Jack London, is one of the five films involved in the copyright infringement suit discusses earlier here. The DVD, from Vivendi (connected to NBC Universal – why didn’t Focus Features pick this one up?) offers a “21st Century 3D” version which did not work with the 3D glasses (Disney I think) that I had a home. You can play either 3D or 2D. The film is in regular aspect ratio. (I wonder if the 3D copied through P2P would have been viewable as such.  I rented the film "legally" from Netflix.)

The story is like that of a miniature “Everwood”. A Montana widower played by Christopher Lloyd takes in granddaughter Ryann (Ariel Gade) for a stay, and at first she’s disappointed that there is no TV or internet. Soon she befriends a stray crossbreed wolf ("Buck"), who is all too tame. With other local boys, she arranges to have him in a race, but there are various obstacles, which tend to blow over too quickly to maintain any suspense. The local sheriff (Veronica Cartright) is about to put the animal down before a mysterious stranger (Wes Studi) intervenes as another of the animal’s “friends” (he doesn’t need Facebook); Timothy Bottoms (now aged) plays the scrooge.

It shouldn't be a surprise to see a wild carnivore befriend man. After all, a Toronto zoologist from Animal Planet "talked" his way into a lion pride by learning lion body language. Carnivores view human beings as a species worthy of respect and sometimes alliance. We don't always return the respect.

The grandfather reads the Jack London “Call of the Wild” story Ryann every night, as a curious way of encapsulating the source material, which generates the movie. That’s an interesting screenwriting gimmick.

Here is a link to London’s story in the Saturday Evening Post (1903). and the story to a reading quiz in high school English classes. (I’ve subbed in classes that did “Hotel Rwanda” and “Lord of the Flies”).

Wikipedia attribution link for Quake Lake in Montana , created by a landslide from a Yellowstone earthquake in 1959, a warning of what could happen in Yellowstone.

Here’s a YouTube clip (by McKrackerman1) about summer reading assignments of London’s work for high school.