"Uncross the Stars": a wife's last wish for her husband to carry on the family 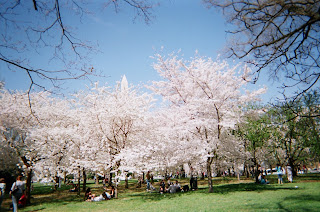 “Uncross the Stars”, from Solipist Fims and Echo Bridge, directed by Kenny Golde, is one of those small films about self rebirth and community, sort of like “the Watermelon” reviewed a while back. It is written by Ted Henning.


A young man Troy (Manitoba born Daniel Gillies) has lost his wife after two years of marriage, apparently to cancer, almost a post of “Love Story.” There is copious outpouring of grief at the funderal. Troy finds a letter from his wife with one last wish, that he go to Happy Valley, Arizona and build his aunt a porch with manual labor, a kind of Ty Pennington project.

Along the way, he encounters a woman delivering a baby (that’s never happened to me on the road), and then finds an odd assortment of old ladies and a codger-cowboy (Ron Perlman), who tests his “courage” with a prop plane ride over the desert. The movie scenery reminds me of the country around Tonopah, AZ, where Dan Fry and “Understanding” had its conventions in the 1970s.

There are plenty of backstories, about compelled marriages and babies that may have not been intended. There is constant emotional cohesion, and gradually Troy has to come to terms with his own grief and how he had been as a husband.

There's a wonderful scene where Troy wakes up in his aunt's home with a self-indulgent tabby cat snuggled against him.

This film is one of at least five independent films involved in litigation for copyright infringement in P2P networks brought by the U.S. Copyright Group, as discussed on the “BillBoushka” blog March 31, 2010. I rented this film (and the other four) from Netflix, legally.
Posted by Bill Boushka at 8:16 PM