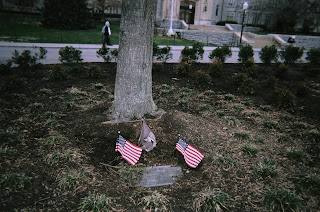 Tracey Jackson (writer of “Confessions of a Shopaholic”) is distributing her own new independent film “Lucky Ducks,” to get us to examine an old-fashioned moral problem: how to look at inequality of opportunity, how to look at people in relation to the circumstances into which they were born, where they started in line.


A “lucky duck” is a kid born to upper middle class boomer parents who gets showered with material advantages and values based more on what they do than who they are.

But the movie itself is a docudrama about Tracey Jackson’s own family in New York City, and her problems raising her rebellious teenage daughter Taylor, who already acts “spoiled” and has an eating disorder. The film quickly makes the point that children in poverty don’t have eating disorders, and raises all the moral questions that got posed in the HBO film “Thin” (see my TV blog, Oct. 14, 2007). Tracey arranges for her daughter to volunteer teaching English in the slums of Mumbai, India, over spring break. The Mumbai sequence is perhaps the best in the film, almost reminding one of “Slumdog Millionaire”. Tracey stays in a 5-star hotel (she is “too old” for sacrifice) while her daughter “pays her dues” partly by staying with a poor family in the slums (with some security).

But Tracey does not get better when they come back home, and for a while her eating disorder gets more dangerous. She is supposed to keep a food journal (rather like a handwritten journal in a high school English class), but instead she places compromising pictures of herself on Facebook, raising the now well-known “online reputation” issue.

I shared some of the same issues in my own upbringing. I had never earned any money outside home until I was paid $1.25 for accompanying a choir rehearsal on the piano. I didn’t have my first wage-earning job until I was 20. I had some of the same anxieties about grades. I had a chance to go to France in ninth grade but was too afraid to go (I finally made it there in 1999). I was attached to my classical record collection as a set of “possessions”; my father once said, “You’re married to your records.”

There are special interviews with Madeline Levine, PhD, author of “The Price of Privilege”; Carol Maxym, Ph. D, author of “Teens in Turmoil”, Mike Linderman, the “Teen Whisperer”, Paul Williams, and James Frey, author of “A Million Little Pieces.”


My picture: from VA Tech campus.
Posted by Bill Boushka at 7:20 PM