The media reports that Detroit may become a major indie film production center, as the area looks for new industries to fill its vacant lots around downtown.

And “Grand Rapids” sounds like a typical Midwestern but slightly other-worldly place for a mental hospital to house a criminally insane former professor who is full of himself and is ready to preach his own version of an “inconvenient truth”. Val Kilmer plays Jimmy, who is no Al Gore. I pause here, to note that “Grand Rapids” was a strategic setup location in my own 2004 Project Greenlight screenplay “Baltimore Is Missing.” It’s a second city that aliens could capture to settle.

I’d like to think I gave a “real” film an idea, at least for a location, and maybe I did. The film was “The Steam Experiment”, and the name was changed (to protect the interest) to “The Chaos Experiment” for the DVD from Genius and Cinepro. It’s another of the five films involved in the litigation against P2P downloaders from the “US Copyright Group” mentioned in the review on April 6.

The “Chaos” refers to what would happen – how people would behave – if the temperature was 130 F for a sustained period. (For one thing, many people would go blind.) The professor tells cops he has locked six people in a steam bath and will ratchet up the temperature unless the newspapers publish his “manifesto” Kaczynski style. On Dec 21, 2012, winter solstice temperatures will shoot up to 130 Fahrenheit everywhere, even in Grand Rapids, Michigan. It’s the end of the Mayan calendar, you know.

The monochromatic yellow-brown steamroom scenes get to be old hat; the setup is nowhere as intriguing as “Saw”.

The official site for the film from Cinepro is here. 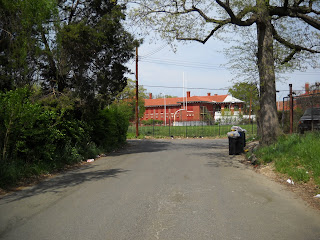