"The Perfect Game": feel good movie about a team from Mexico winning at the Little League World Series in 1957 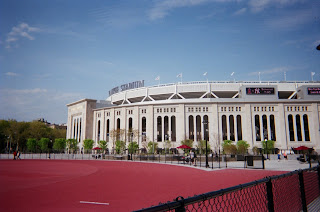 It seems like baseball gives us plenty of material for feel-good movies, and the indie production “The Perfect Game” about the true story of a team of kids from Monterrey Mexico making it to the1957 Little League World Series, with Angel Macias (Jake T. Austin) pitching a perfect game to win the clincher, is a real ride.  The film does refer to the perfect game that the Yankees's Don Larsen had hurled against the Brooklyn Dodgers in 1956.


The film comes from a small distributor called “Industry Works” with “HighRoad Entertainment” as the main production company, with William Dear as director, based on the book and adopted by William Winokur.

The film recreates the shantytown in 50s, along to a sweatshop steel mill where many of the pops work, effectively with sepia tones – much of it may have been done with CGI. Clifton Collins, Jr. plays Cesar, the father figure who is coaxed by Angel, literally, into coaching the team.

The script plays on the race issue and segregation, which did affect Hispanics. There is a scene where the boys will not take the field until they have a priest for prayers. According to the end credits, one of the players had to give up baseball and possible college to take a steel mill job to support his siblings.  It happens a lot.

The film also contains some black-and-white clips of major league stadiums and baseball in 1957, the last year that the Dodgers were still in Brooklyn, and a meeting of the boys with President Eisenhower.

Little league games go only six innings. Despite the smaller size of the boys from Mexico, they won many games “on the road” by lopsided scores (including their first game in McAllen, TX, 9-2, with a sudden sixth inning rally).

The film appears to have been shot in California and Mexico (the land around McAllen is not mountainous, and there is a scene with a US flag with too many stars for 1957).

There was no acceptable embeddable trailer of the movie (there are some on the website that I had trouble getting to play properly), but ESPN provides an interesting embed of the Little League World Series.