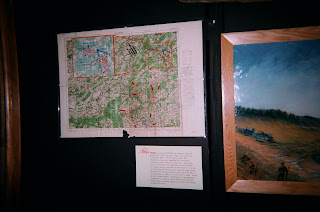 The film focuses on why soldiers write, which is why anyone writes. Blogging has been a valuable source of journalism about the wars in Iraq and Afghanistan, but a lot of the episodes involve written journals. The film is timely now because recently the Pentagon has authorized more use of social media (but then there is “don’t ask don’t tell”).  The director Robbins says that many soldiers have never been allowed to perceive themselves as "writers" before.

There is also some clever, woodcut-like animation.

One soldier says that he volunteers go to back to Iraq, and that his wife should not conclude that he loves the Army more than he loves her. No, just that someone has to do it.

There is a comment that a nation that sacrifices its youth will lose itself.

The last part of the film traces the journey home of the hearse of Chance Phelps, narrated by Robert Duvall. But this story would be told in the 2009 HBO film “Taking Chance” with Kevin Bacon.

The site for the film is at the Documentary Group, link here.

PBS offers a YouTube video on the “Taking Chance” portion.


Awesome post,If you have any issues that are related to epson products so you can contact me because we provide the solution to your issues
Epson tech support