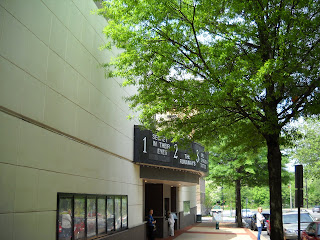 “Greenberg” (dir. Noah Baumbach, Focus Features) has been around a while, and I personally found the idea of comedy king (Ben Stiller) playing a mildly autistic adult (probably with Aspergers) a bit underwhelming.

Roger Greenberg is the classic underachiever, just out of the “hospital”, apparently treated for apathy and whatever. (In my stint at NIH in 1962 as an “mp”, I recall that “apathy” was one of the diagnoses of another college-aged patient.) He prides himself in well articulated complaint letters to companies and newspaper LTE’s. (He would be a good blogger.) He is invited to temporarily relocate from New York to LA to housesit for his accomplished brother (Chris Messina) as the later takes his family to Vietnam for vacation. A carpenter, he’ll be “employed” by making a doghouse for Mahler, a Labrador retriever who is one of the film’s best characters.

He looks after Mahler all right, taking him to the vet and then to the animal hospital when he gets sick. But all sorts of other characters happen by, climaxing in a drug party toward the end (oh, those are The Kids). The “friends” make you wonder how the superficial materialist and hedonistic conformity of our society leaves people out.

His brother’s assistant (Greta Gerwig) provides some explicit scenes and some pseudo-romance for Roger. But it’s the other friends who bring up the back story of Roger’s failure to keep a record deal twenty years before who make things interesting. Old friend Ivan (Rhys Ifans) is generally disappointed at Roger’s behavior, and at one point Roger doesn’t recognize “Vic” as the name of Ivan’s son, referring to the name as “diminutive”. Mark Duplass, as Eric, still acts the part of Josh Segers from “The Puffy Chair" who can forget that movie or that assertive character.

The site offers many trailer and they appear to be embeddable, but Universal’s embed code doesn’t copy (probably a script programming error). The same code is available from Hollywood Streams on YouTube and works. The trailer, in 2.35:1, looks sharp in full screen on a “wide screen” laptop display.

AMC Theaters still doesn't allow outside food, but on Sunday there was a free continental breakfast, with coffee, croissants, and orange juice, and chocolate cake, all from the Harris Teeter next door. But why not redo a deal with Caribou coffee? It just makes business sense.
Posted by Bill Boushka at 4:58 PM