DiCaprio narrates "Hubble 3D" in Imax for WB; despite the billions of galaxies seen, our home planet is his main concern 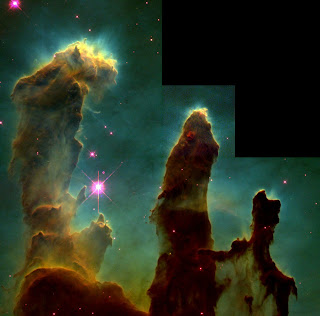 Warner Brothers and perhaps other major studios (like Sony) are getting into the business of making IMAX museum shorts, such as “Hubble 3D” (43 min), now playing at the main NASA Smithsonian Museum on the Mall in Washington DC.


Leonardo DiCaprio narrates, and at the end uses the image of Earth from space to buttress his argument about protecting the planet from climate change.

The film comprises two sorts of episodes. There is a lot of footage inside the Shuttle and of the men (including Scott Altman, the shuttle commander) making repairs to the Hubble (in a 2009 launch). At one point, a crew member has to replace 32 screws, and says he has to keep his mind, in Zen fashion, on each instance as he completes the task, and not even keep mental count of how many he has done.

There is also a lot of animation of what the Hubble sees as it peers deeper into space, starting with the Crab Nebula, 1500 light years away, which is a nursery for new stars. The film shows the “Pillars of Creation” (Eagle Nebula) image. The film says there are a few hundred billion galaxies, arranged in hierarchal groups. Since each galaxy has billions of stars, that’s a pretty compelling argument for the likelihood of life elsewhere, no matter how perfect the circumstances of Creation on Earth seem.

The official movie site is here.