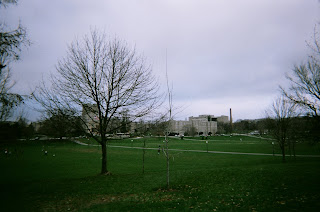 Logo Entertainment offers the British period piece and mystery “Affinity” as one of its top LGBT films. Directed by Tim Fywell, based on the novel by Sarah Walters, the film and DVD have been offered in conjunction with MTV and Paramount Vantage. The film (much of it shot in Romania) looks like an interesting mixture of Merchant Ivory period piece and Gothic thriller that anticipates Paramount’s subsequent “Shutter Island”. I suspect that Martin Scorsese had become familiar with this film before making the later. It’s about weaving a mystery and horror story in a confined institutional space, here Millbank prison in the 1870s (the actual building was in Romania).


Most film buffs are familiar with the basic setup. A wealthy young spinster Margaret (Anna Madeley) volunteers to become a “lady visitor” at the prison (somehow that reminds me of the diplomatic visit to Supermax in the US that recently ended in a fiasco on an airplane). She befriends Selina (Zoe Tapper), having been convicted for murder, drawn into Selina’s ability (thought fraudulent) to call upon occult spirits, especially Peter Quick, whom she says caused the accident. Gradually a relationship develops, bring out questions from the prison matron on their being “sweet”, but drawing Margaret into a situation that could confront her with prison herself or even end her own life. The plot goes down ambiguous lines (as does Scorsese’s film) setting up an “escape” with a deadly paradox at the end, almost like in an Alfred Hitchcock film. Margaret has to deal with all the conventional social pressures to conform and on the tendency of everyone to interpret motives based on these norms.

The DVD has interviews; when Sarah Walters speaks, she holds a gigantic cat in her lap.

The Logo link for watching the film is here.

Here is a YouTube video about Sarah Walters from “BeakerJT”