"Valentine's Day": a big payoff, but mostly a round-robin of ten people on Cupid's day 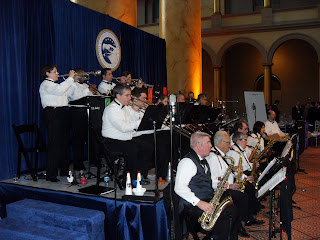 Well, for an LGBT audience, the “payoff” in New Line’s offering “Valentine’s Day” comes in one piece, and it is a bit of a spoiler – for a movie out six weeks now, perhaps delayed for some people by the blizzards. That is, when renaissance pro football quarterback Sean Jackson (Eric Dane) outs himself (in 90s talk, “announces his homosexuality”) at a press conference, as he plans to return to pro football. Then near the very end, Holden (SNL host Bradley Cooper) gives him a first screen kiss – so we cover “don’t ask don’t tell” (previously pretty much the case in pro football and pro sports in general, Dave Kopay notwithstanding) and gay marriage in one swoop.


But the rest of the movie, while a “romantic comedy”, progresses the way a Robert Altman movie would: various couples in interlocking stories, as the script walks the track with them. Much of the film centers around florist Reed Bennett (Ashton Kutcher – the first bedroom shot seems to diminish his 74-inch frame), having enough trouble in his own romantic life as those of his customers on this busiest day. The big thing is that too many people have more than one lover to send flowers to (hence Kutcher's character has to follow a "florist's code")– and yet believe they’re “committed”. One of my own screenplay scripts, a sci-fi exercise called “Titanium” starts with this premise, when the fiancée of a technology reporter “goes up” and the police are suspicious. My exercise is far from gentle, of course. But director Garry Marshall (a judge in many episodes of Fox’s “On the Lot” contest in 2007) keeps his hand one of kindness. There is a line where Edgar, I think (Hector Elizondo) says, someone knows you love her (or him) when you do something for her in public.

Julia Roberts (“Erin Brokovich” in 2000) plays the sympathetic “straight” (by law) Army Captain Hazeltine on the flight, humoring Bradley Cooper’s character, not able to say too much. Then, she makes a uniform change in the lavatory. There’s a lot of behavior on the planes and in airports in this movie (some of it by Kutcher’s character) that would get you arrested in real life.

Time Warner seems to make limited use of its New Line brand, mostly for “romantic comedy” now. Gone are the days of pie charts (and of hobbits, too).

“The kids” show up here: Track star Willy is played by Taylor Lautner (the other “Taylor” – Swift, appears, and both have hosted SNL!), and an almost gaunt if muscled Carter Jenkins is the peripatetic Alex, wielding his guitar in a scene where he displays the world’s shaggiest legs. Jenkins, now 18, was a star in the NBC sci-fi series “Surface” a few years ago as a restless but innovative middle school kid, who befriends a wild “nimh” dragon that makes the story of that series; there is a scene with a little dog here that shows Jenkins’s natural affinity for animals again (you expect “Nimh” to skirt across the screen again!) Yet, here the kids’ parts are like some of the others in the movie, wandering through the day without a lot of closure.

There is a classroom scene, showing the "helpful student" concept that I remember as a sub; also giving us the history of Valentine's Day; certain Roman emporers did want soldiers to meet women or get married (remember, in the light of the DADT debate, that in 1993 the Marine Corps didn't want married men to join?  They didn't want gays, and they didn't want straights.)

The official site for the film is here.  New Line offered its own embed code, which would not connect to their server when tested. So I'll use the Hollywood streams video, which I think is the same thing.

Picture: from SLDN benefit to lift DADT (not from film, but distantly related to film; my picture)
Posted by Bill Boushka at 2:09 PM