Tim Burton's "Alice in Wonderland", in 3-D, is pretty far into the fantasy world 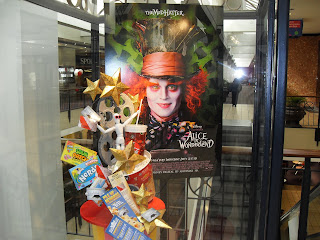 Tim Burton is best known for his gentle weirdness, bridging reality to fantasy (remember “Big Fish”), and his latest film, the modern 3-D realization of Lewis Carroll’s “Alice in Wonderland” (from Walt Disney Studios) tends toward the fantasy.

Visually, the character who made the most impression on me was probably the Red Queen (Helena Bonham Carter -- from her throne she puts her feet on a pig to keep them from falling asleep); but the concept of a teenage girl’s (Mia Waiskowska) falling through a rabbit hole in the ground “Jules Verne style” into an alternate reality is a bit old (“Pan’s Labyrinth” is so much more original).

One of the interesting analogies comes from the caterpillar Absalom, who provides a bit of a metaphor to the Old Testament story about David’s rebellious son (see my “Drama Reviews” blog for Aug. 9, 2009). Absalom eventually “hangs” upside down, as if to become a pupa, a natural event in biology.

Stephen Fry provides the voice for the Mephistophelean Cheshire Cat, with the overwide bite. We give cats a lot of credit in our fairy tales.

Johnny Depp supposedly drew his own character, the Mad Hatter, which at one time was the name of a disco in Fort Worth, TX. Christopher Lee plays Jabberwocky.

The film is shot in “mere” 1.85:1; I was a little disappointed, expected full Cinemascope for Burton’s vision.

Disney’s official trailer is here on YouTube (for USA), but why disable the embed and make you go to YouTube? But Walt Disney studios in New Zealand provided an embeddable trailer.

I saw the film at an early Friday afternoon show at a Regal in Arlington VA on opening day, before a small crowd.
Posted by Bill Boushka at 3:45 PM