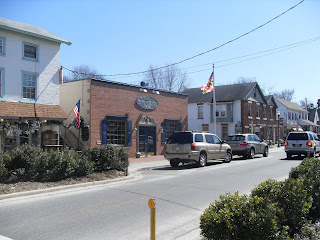 Kenneth Branagh’s remake of the minimalist “Sleuth” (2007, for Sony Pictures Classics and Castle Rock) , with a somewhat repetitious score by Patrick Doyle, based on a play by Anthony Shaffer, does seem like a glitzy exercise in abstraction from all the traditions of cat-and-mouse “thrillers”.

This time Michael Caine plays the aging mystery writer Andrew Wyke, and Jude Law is the younger, virile unemployed actor Milo Tindle. The country estate inside is modern and cubist, with lots of use of icy blue, and surveillance cameras everywhere.

Most people know the setup. Milo has been “seeing” Wyke’s wife, and they have to work out a deal. In the early rounds, it seems like Milo will have to pull off a caper to “defraud the insurance company”. The skylight sequence reminds me of a Sunday school fire escape exercise back in the early 1950s where I was afraid to climb down.

The men match wits (in the movie's middle section a supposedly expired or esacaped Milo dresses up as police inspector Black), trading who has the upper hand, almost passing into homoerotic territory. Caine’s greatest line is “the shortest way to a man’s heart is humiliation”. Later “I like intellectual stimulation … you’re my kind of person.” Jude says “a lot of people like my body, I don’t know if anybody likes my mind.” Then "you're not a girl."

The Cinemascope seems gratuitous, except for a few scenes where the actors appear horizontally. The “isolated house” situation anticipates “Ghost Writer.”


The DVD has a short "A Game of Cat and Mouse." Screenwriter Harold Pinter talks about how he wrote and adapted the screenplay without seeing the very different 1972 film, only by reading the original play, and made it "his" movie. Another short on makeup shows how Jude Law was made up into Inspector Black, given nicotine marks, with a notation that he is real "hairy."
Posted by Bill Boushka at 8:38 PM