Sam Rami's horror flick "Drag Me ": what if your job is to say "no" to customers? 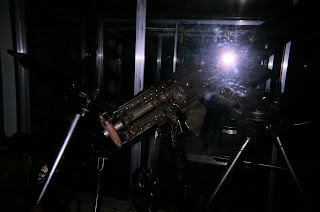 Have you ever felt you were “right”, but uncompromising, and then attracted the indignation of someone, who promises that, because of your hard-heartedness, “they” will make your life a living H___?

I know that territory in the domain of psychological, perhaps even supernatural horror, but not carried out with the explicit special effects of director Sam Rami (for Universal Pictures). I would think he could have come up with a more upscale title than “Drag Me to Hell”, which, at the end, is literally what happens to heroine Christine Brown (Allison Lohman), who has the wonderful boyfriend, psychologist Clay Dalton (Justin Long, one of whose first lines in the script is that he looks too boyish). When he mistakenly shows her a trinket from earlier in the story, she slips onto an LA Union Station track below an oncoming train, with the flames from Hades below the tracks.

Her spiritual mistake was turning down a second mortgage loan to a gypsy woman (Lorna Raver) in a foreclosure situation, in order to get a promotion from her boss. This is one of those jobs were the boss tells you to be tough. She even tells the family of the woman that she is just an employee during her job! I was in that position one time working in collections, and a debtor, owing only $65, asked if I would pay his debt for him. I got plenty of indignation over the phone on that job. She didn’t have a family yet, and she didn’t get that people needed second chances for taking more risks in life for the benefit of others. She is to be brought low for not showing or even feeling compassion.

What starts out as a morality play quickly turns into schlock, rather like a Supernatural episode. At one point, the issue of “blood exposure” (for HIV) with “casual” accidents in the office comes up. Later, the Ouija scene is total nonsense (compare to “Paranormal Activity”). So is all the fortune telling with Dileep Rao.

The best thing in this movie is the closing credits concert piece for violin and orchestra (A minor) by Christopher Young, with some Mahlerian devilishness (violin effects like those in Mahler’s Fourth). It’s worthy of concert performance.

The official site for the movie is here and it offers an embeddable trailer.

The DVD includes a featurette short, "Production Diaries", hosted by Justin Long, in shirt and tie and rolled up sleeves. He opens with a curious monologue on what a production diary is not: it is not like Twitter. It doesn't say "today I waxed my entire body." Don't worry, Justin didn't, he didn't have to. The short does show how the special effects were created, especially the nosebleed scene. In my movie, I won't have to deal with that.

Rami says that Long has a certain upbeat Persona that works for the film.
Posted by Bill Boushka at 6:54 PM