"Remember Me": cycle of family tragedies, leading to a tragic day; a "moral" lesson? 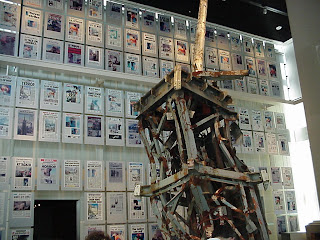 If something happened to you, if you got taken out, because of being in the wrong place at the wrong time, and because of the wrongful actions of others, how would you be remembered? I’ll set aside the religious questions about salvation (the Bible makes warning about the unpredictability of earthly life), and focus on termination of experience that others see.

The film “Remember Me”, directed by Allen Coulter, written by Will Fetters, from Summit Entertainment, poses that question, with three tragedies, two of the type described above, bringing two families in NYC together through a romance between Tyler Hawkins (Robert Pattinson, who is listed as an executive producer) and Ally Craig (Emilie de Ravin). Let me add, before going into the story, that in retrospect this film strikes me as a “conservative” movie; it wants to impart to the viewer a moral lesson. Ten years ago, in 1991, Ally had witnessed the shooting of her mother on a subway platform, and Tyler recently found his brother had hung himself. His father, played by Pierce Brosnan, is a high-flying lawyer on an upper floor of the World Trade Center – hint. Roommate Aidan (Tate Ellington) acts almost like another brother to Tyler, whose outbursts come out of his rage. He has gotten arrested for disorderly conduct by a copy (Chris Cooper) who turns out to be the pop of Emilie. (Yup, Tyler can’t stay out of jail.)

Pattinson looks haggard enough the first time we see him, smoking (how depressing!) He (that is, his character Tyler) smokes like a chimney throughout the film. Heavy smoking makes men go bald in the legs, eventually, but nobody noticed back in the heydays of tobacco use before this generation. Pattinson looks a little beefier here than in the second Twilight movie (where he’s pretty pale), maybe because Taylor Lautner isn’t around for comparison. (When appearing together, they invole the Biblical story of Jacob and Esau!)

The background noise (like George W. Bush talking about stem cell research on television) tells us it’s the summer of 2001, and we can figure out what’s coming for the end.

I’m reminded of another film about the period right before 9/11, “August”, with Josh Hartnett, reviewed here Nov. 1, 2008. I remember that period well myself. On Aug. 11, 2001, home from Minneapolis, I went to Rehoboth for the day, saw a tornado, and came back to DC to learn of a water main fire. The ten days or so right before 9/11 would get really interesting, and oddly prescient.

One of my screenplays, “American Epic”, has a (fictitious) situation where a (DADT) closeted lesbian at the Pentagon gets a phone call from her partner in the WTC North Tower on the morning of 9/11. The partner, a lawyer, gets out in time.

Summit’s official site for the film is here. Summit should develop a musical trademark to accompany it’s “pyramids” logo. (Lionsgate’s is still the best in the industry to my ear.) The official corporate site is here. I recommend reading the company info.