"Rebecca" and "The Gothic World of Daphe DuMaurier": does a plot change in the movie end affect the viewer's experience? 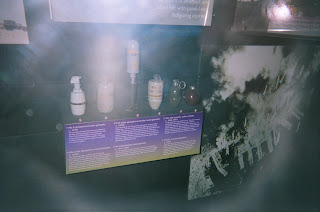 The classic “Rebecca” (1940) certainly delivers the payoff at the end. Maxim de Winter (a younger Laurence Olivier) approaches his estate Manderley in his snazzy car, driving left side, at 3 in the morning and notices a glow in the sky. For a moment there is talk of northern lights. Pretty soon sees that Manderley (itself a character in the film, almost like in the 1976 thriller "Burnt Offerings" -- with that line "I know what I do") has the same fate as Tara, with the evil housekeeper Mrs. Danvers (Judith Anderson) waiting to be immolated inside, even as his second “nameless” wife (Joan Fontaine) has gotten out. The camera shows the “R” on the bed pillow, and the music score (composed by Franz Waxman) crashes to a triumphant E Major close.

The MGM DVD contains extras (including the full short “The Gothic World of Daphne Du Maurier”) that explain the context in the work of director Alfred Hitchcock (and goes into the author’s bisexuality). The film was produced by Selznick International, and released in 1940 (one year after the same company’s “Gone with the Wind”), which was thought of as an “independent production company” in the parlance of those days. “Rebecca” was released by United Artists, which in earlier times was the vehicle for “independent films”, but the public perceived UA as if it were another but virtual “major studio” because its films were so large and prominent. Rebecca was the only film from this director to win “Best Picture”. As it was being made, the inevitability of the coming war to Britain and then the US was hanging over the lives of the privileged.

The film produces the nameless heroine in a challenging situation, a common theme for both Du Maurier and Alfred Hitchcock. Selzick wanted the book to be filmed literally, whereas the famed British director preferred to craft everything into his own art. The film is fairly literal, except for the end, which we’ll come to in a moment.

Of course, most people “know” the story. The heroine comes to Manderley as Maxim’s second wife, and lives in the shadow of the “ghost” of Rebecca, the first wife. It’s Mrs. Danvers who taunts her, in such little ways at first, as when she goes into the “morning room” where she learns Rebecca used to do her correspondence after breakfast every day, and call for a servant to take it to “post” (there’s a suspicious pooch in the room, an early clue). The film communicates the mentality of being a “lady of the house” in that era of British upper class society (or in general). There was no “do it yourself” mentality as today with the Web. Social structures were oh so important!

The film takes on the atmosphere of horror and a thriller without ever becoming supernatural overtly. Within the confines of the 1939 production code, one gets the impression of a lesbian aspect to Mr. Danvers and her obsession with the new lady of the house. Given both the director and author, it’s not surprising to wonder if Rebecca had been murdered, and the evidence starts to mount, most notably when her corpse is found in a sunken boat – a scene with some 1939-era black-and-white fireworks that somehow recalled to my own mind a scene in “Mutiny on the Bounty”.

I can remember as a boy that I didn't like it if a movie changed to story of a novel; it seemed like a violation of the author's work. The production code of the day did not allow a murder of a spouse to go unpunished. I guess the loss of Manderley is not real punishment. The question comes up, is the changing of the cause of death to probable accident (or improbable suicide) following a diagnosis of cancer (and not a hidden “English literature” illicit pregnancy that would have stained Maxim’s old school and Victorian family honor) effective? It seems a little unconvincing, even if the dialogue scenes with the police near the end are pretty effective.

The issue of plot change is of no small importance to me. I have a GLBT-oriented script (“69 Minutes to Titan”) where the lead character has become involved with a precocious younger adult male who takes him, more or less through computer hacking, into the world of UFO’s and government cover-ups. The government wants to get him. One variation of the plot, most controversial in the minds of some, has the young man under the age of 18 during some of the story, even though very adult-acting and looking. That would give the government the opportunity to prosecute, convict, and even “treat” him under other charges, still covering up the UFO issue. A further plot variation can occur depending on whether the lead character “knew” the younger man’s age. The idea seems offensive to some people, but the younger character is in no sense “morally” a child who really can be exploited; the legal system, however, regards him as one, for part of the span of the film -- and the audience might see the protagonist as narcissistic. But a script like this would have to be manipulated, down to basic story elements, depending on the expected MPAA rating and sensitivities of investors. It’s possible to keep the story entirely within the UFO-coverup area and invent other charges, but then the film is not as sharp-edged. To make a great film, you have to be hold sometimes.