"No Reservations": a dramedy about food and family responsibility 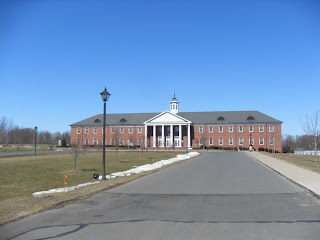 Hollywood really gets the practical occurrence of involuntary family responsibility, and another example is the film “No Reservations”, aired on Lifetime March 6. But this original came from Warner Brothers (with the Casablanca trademark), Castle Rock and Village Roadshow, and is a big, if intimate, production, directed by Scott Hicks.

Catherine Zeta-Jones plays Kate, the lead chef (in whites) at a chic New York restaurant. Her employer is already concerned enough about her to send her to a very intrusive shrink. Maybe that’s common in the Manhattan upper crust. One day her sister and niece are on the way to visit. The sis calls from a cell phone in the car, an Oprah no-no, and soon we learn about a tragic accident. The sister’s handwritten will suggests that Kate should raise the niece Zoe (Abigail Breslin). Kate even tries to hire a nanny for her; she doesn’t work out because she talks too much about her master’s thesis on Ebola virus. Then Kate gets in trouble for letting Zoe “work” at her restaurant, and she learns of things like Child Protective Services, provoking a fight with Zoe, who then thinks Kate really doesn’t want her.

But the other main thing is that Kate’s boss hires another chef Nick (Aaron Eckhart), who loves Puccini, and seems to be vying for a job. (“Cooking is for girls.”) But then there is man meets woman. You get a family drama reminiscent of “Everwood”. Yet, Kate insists “this kitchen is who I am”. Nick says, her work is only a little part of who she is.

The “for-grantedness” of blood relations, with all their soap opera emotions and intimacy, seems very vital to many people. I recall an episode of “Jake 2.0” based on “loyalty to blood.”
Posted by Bill Boushka at 7:42 PM