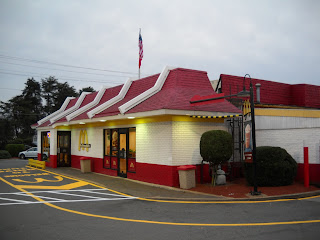 The Biblical story of David and Goliath translates into the epic legal battles of the indie film “McLibel”, from Cinema Libre (2005), directed by Franny Armstrong and Ken Loach. The “David’s” were Helen Steel and Dave Morris, who took on McDonalds, which had been filing the British version of “SLAPP” libel suits against anyone (mostly publishers and television stations) who criticized them in Britain. The company would act like a bully because it could get away with it. It had "paid its dues". it thought.

The film ties in to the more modern debate on the British problem of “libel tourism”, often covered on these blogs. For example, see my Book Reviews Blog Oct. 14, 2007 for the suit against author Rachel Ehrenfeld in Britain by Saudi businessman Khalid bin Mahfouz. I recall back in 1997 that Kitty Kelly had said, discussing her book "The Royals", that in Britain, truth is not an absolute defense to libel as it is in the United States.

The film recreates the trials in British court with actors (with scenes resembling those of some Colonial Williamsburg DVD plays), where Franny and Ken demonstrate the validity of their claims that McDonald’s is bad for health, disturbs the environment, and has abusive employment practices. Others have said that the fast food business tests whether “you can work” -- as if everyone should have to do it some time (a kind of “free market cultural revolution”; there is mention of "hamburger university"). The court eventually found that some of their claims were valid, but not all. But eventually their case wound up before the European Court of Human Rights, which would wind up with a fine against the British government. McDonalds was never able to collect on its judgments.

The film sometimes goes into the “left wing” area and describes most of the world’s problems in terms of poor people fighting over the scraps left by the rich, when the rich had never deserved to be there.

Imagine “McLibel” suits against bloggers in the age of the Internet – fortunately most of the frivolous litigation started in the 90s against more conventional forms of published speech.

This film also lives as a 52 minute television documentary from 1997 (before the European Court part took place).

The film makes the point that now “the public” is the Goliath, and the “corporation” is the little guy. That is the final irony.

A major website dealing with the McLibel trial is “McSpotlight” here.
Posted by Bill Boushka at 4:17 PM