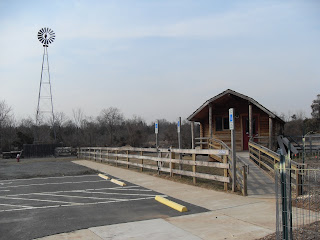 The Loudoun Heritage Farm Museum, in Claude Moore park, SE of Leesburg VA (link) shows a ten-minute wide screen film directed by Staples, (with the same title as the name of the museum, dated 2000) about agricultural history in northern Virginia back to colonial times. In the course of doing so, it hits on many social issues that punctuate American history.

Although the county was between the Iriquois and Powhatan tribes, making it easier to settle for a while, it supplied men to the Continental Army during the Revolution. During the first part of the 19th century, most farmers owned only a small number of slaves, but the film depicts newspaper ads for slaves sold as whole families, to us a shocking perversion of the concept of family. The county suffered heavy damage in 1864 but farm production bounced back very quickly, before 1870, after emancipation. Later in the 19th century there was a major depression in farm prices.

During both World Wars, farms suffered severe labor shortages because of the military draft, especially during WWI. Lifestyles continued to be very family oriented as electrification only gradually reduced the importance of cooperative manual labor on the farm (the museum has a model of a kitchen before electrification). But starting in the 1980s and 1990s the County transformed into a high-tech region (the former headquarters of AOL are shown).