"Harriet the Spy: Blog Wars": what happens when high school students have a blogging contest? 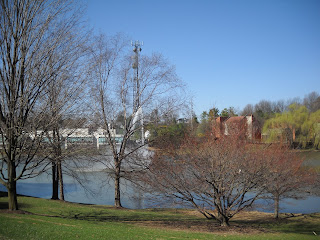 Well, the Disney Channel film (actually from Canada, “9 Story Entertainment”, directed by Ron Oliver), “Harriet the Spy: Blog Wars” seems like a cross between “High School Musical”, (even “Were the World Mine”) and “Gossip Girl”. Harriet is quite the Serena, ultimately spreading rumors. But wait a moment. This little comedy has a lot to say about the issues of promoting yourself online.

High school (senior?) Harriet Welsch (Jennifer Stone) says at the beginning that a writer’s job is to watch or spy on people to tell the truth. Actually, well, journalism is a little more complicated than that, but, yes, undercover journalism in the big networks is alive and well, thank you. So the newbies should do the same.

English teacher Miss Finch (Ann Turnbull) appoints two students to write blogs about the school, with a contest to determine who will become the “Class Blogger”. The opponent is to-be-prom-queen Marion (Vanessa Morgan). The blog will have full privacy settings and be reachable only by members of the class (or maybe the school). Well, we all know how easily information available to “friends” gets out on the whole Internet. Remember the subject of online reputation defense.

The plot complexity shows that life is more improbable than we thing. Harriet’s father (Doug Murray) is a film producer, and apparently the high school class stud Skander Hill (Wesley Morgan) is in it. Now in real life, most teens that make it into Hollywood behave very well in school, but Skander is no Zac Efron (or no Troy Bolton, thank you). Harriet digs up the dirt on him and draws readers to her blog with it. She eagerly watches her “Analytics” statistics on her blog.

The situation comedy builds, toward a frantic conclusion like “All’s Well that Ends Well”, but at one point Harriet is confronted with the possibility of being required not simply to stop writing about Skander but to give up the blog altogether, possibly even the idea of becoming a writer – for the existential reason that she could not be trusted.

During the 2006-2007 school year, a Fairfax County (VA) English teacher Erica Jacobs (also an English professor at George Mason University) taught a blogging project to her high school seniors, one which led to some anxiety among school administrators despite the ground rules that blog post content definitely stayed in the G-rated category and did not give out personal information. She described the teaching experience in a few 2007 columns in the Washington Examiner. Some of the articles have disappeared, but this one remains, link. Her main blog is here.

There have been numerous news stories, of course, about issues in schools because of students, and even teacher blogs or other online activity. I wrote about this on my main “BillBoushka” blog (follow Blogger Profile) on July 27, 2007.

I’m glad to see a film about student blogging made. The next one won’t necessarily be a PG-rated comedy. The film does seem to fit the Walt Disney Pictures “Magic Kingdom” trademark after all.

As I recall, the name of the high school in the film is "Westview" (in Ontario somewhere).  I subsitute-taught at a school named "Westfield" in Fairfax County VA some time back.  I suspect some administrators in a lot of school systems cringed at this film if they saw it.

Judging from some recent events (see my main blog March 31), some DGC filmmakers ought to do a film on P2P copyright infringement.  It's not just a U.S. problem!  (And consider both sides of the issue, please.)

Picture (mine): James Madison University, Harrisonburg, VA (2010).
Posted by Bill Boushka at 6:57 AM

I have been visiting various blogs for my Term Papers Help research. I have found your blog to be quite useful. Keep updating your blog with valuable information... Regards