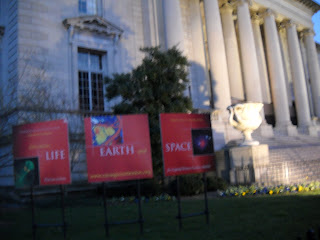 I finally made it to the DC Environmental Film Festival this evening at the Carnegie Institution for Science (link), to the Shorts program, link here.

For me, the two shortest films carried the more ominous messages.

"Clean?Coal" (2009, written and directed by Joan Murray, 4 min) was an animated satire of the idea that coal can be a clean fuel. It showed, among other things, mountaintop removal (strip mining) in animation. The end of the film is a “black out”.

"Polaris" (2009, prod, dir. By Chirs Linder, Bob Sacha and Maisie Crow, 10 min) traces a team of scientists (the “Polaris Project”, not to be confused with “Solaris”) exploring the ecosystem in a near abandoned former Soviet port city on the Arctic Ocean, to the far East. The permafrost is shown and analysed, and the point is made that there may be more carbon or greenhouse gasses locked in permarfrost than in all the Earth’s atmosphere now. As a result, runaway global warming, a “Venus Effect”, is possible. (Think of the planet Venus as a tragedy.) Other scientists report that methane is already being released from the Siberian coast, and methane is a much more effective greenhouse gas than even carbon dioxide. (That’s why the Saturn moon Titan is relatively warm given its distance from the Sun.)

"Frederic Back: Nature Above All" (2009, dir. Phil Comeau, Quebec, 25 min) is a biography of one of Canada’s prominent environmental-centered filmmakers (using animation often), who won Oscars for the short films ( “Crac!" and “The Plan Who Planted Trees”); clips from both Oscar ceremonies are shown, and that cost something to get the rights for. The director was present for questions. His website, for DVD’s, is here. (Note that the first name is spelled without the “k”; if you include it, you get a parked domain taking advantage of his name, maybe a trademark issue.) “Back” is rather uncommon as a last name; in my boyhood, that was the name of my “imaginary playmate”.

Here's a discussion of Back from YouTube by ErwanLegalll.

There seem to be several copies of "The Man Who Planted Trees", in pieces, on YouTube.  I'll check this out later.

The shorts program was preceded by a brief ad from the UK's Digital Arkive (link) -- the "Noah's Ark" of film -- that showed a curious image of a hairy chimp's arm next to a less hirsute human's, as if to show that we and the apes are almost the same genetically (if not so physically), OK, buttressing evolution as scientific fact. 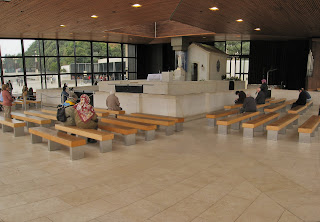