"Bag It" and "Bhutan" at DC Environmental Film Festival 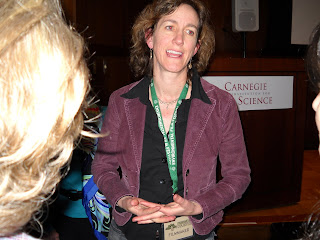 On Sunday, the DC Environmental Film Festival, at the Elihu Room Auditorium at the Carnegie Institute for Science, showed the documentary “Bag It”, from REEL Thing Productions, in Telluride CO. As the title suggests, the film deals with the huge accumulative effect on the environment from plastics, non bio-degradable waste. The star is Jeb Berrier, who, while supporting his partner’s pregnancy, looks into the possible effects of all this waste on the upcoming baby, born at the end of the film. No, it’s a very different film from “Baghead”! The website is here.  Director Suzan Beraza was present for questions. The film is a “work in progress” with the final due in May (we saw about 65 minutes of footage). The opening scene in Colorado reminds me of the WB series “Everwood”.


The film makes some startling social observations, particularly that our particular brand of individualism, so focused on acquiring things and on personal efficiency and “convenience”, is not sustainable, and that we need to rediscover ourselves as social creatures. This is a theme that we hear a lot these days, from both the Left and Right in different venues (like “the natural family”). Later, the film gives us a big dot to connect by point out that plastics-based toxins (especially BPA) can cause loss of sexual differentiation in mammalian offspring, and lower sperm counts, including humans. You can put the pieces together and wonder what is next for transgender and gay rights issues.

The film covers the way plastic waste gets into the ocean food chain, particularly in some specific loop areas as east of Hawaii. Fish and sea mamamals are eating a diet laced with "artificial popcorn".  The stomachs of a few fish are shown, bringing up Clive Barker's imagery of "a fish within a fish within a fish" in his novel Imajica! The visual images of trash around beaches and waterways in the film is shocking. Compare to the PBS Frontline "Poisoned Waters" films reviewed on the TV blog Sept 23, 2009 (also in the festival).

Curiously, CNN’s Larry King Live held a relevant program today on the harm of preprocessed foods and on learning to cook for oneself from natural ingredients, even as a defense against recession!

Oprah Winfrey has urged consumers to buy bags for shopping and reuse them. Recently, the District of Columbia passed a 5-cent per bag charge. 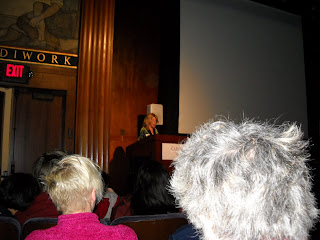 Later, in the same auditorium, another “work in progress”, “Bhutan: A Kingdom of Happiness”, dir. Dara Padwo-Audick, 30 minutes, was shown. The young new king of Bhutan, Jigme Khesar Namgyel Wangchuck, started the process of turning Bhutan into a parliamentary democracy (and constitutional monarchy) in 2007. The country is the only one in the world that supports a policy of ‘gross national happiness” although that concept might be thought of as “contentment” or “harmony”.

Here is the trailer from Enlightened Media

Here's a picture I took in 2008 at the Smithsonian folklife festival from the Bhutan exhibit. 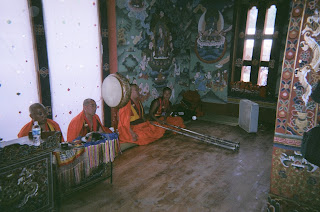