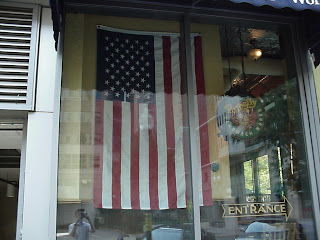 Today, after fighting through single tracking on the Metro and the Washington Tea Party to get to Landmark’s E Street, I saw “Show 6” of DC Shorts. All films would have been suitable for PG-13 except one (mentioned below), but there were plenty of potential teen filmmakers in the audience.

“Thick as Thieves” (USA, dir. Chris Demarais and Marshall Rimmer, 9 min) has young professional men, when waylaid in a back alley in Austin, TX, joining a crime crowd to make an easier living. The concept is pretty cynical, but it’s supposed to be funny.

“The Leap to Happiness” (“El Salte a la Fellcidad”, Colombia, dir. Andres Cuevas, 8 min) contemplates “risk taking” in deciding to swim across a dangerous river and “let go” of things.

“Boo” (USA, dir. Michael Goldberg, 12 min). On Halloween, a woman has to wonder if trick-or-treaters are from the beyond. It reminds me of Sony’s “Baghead”. This film won the "filmmaker's favorite" vote for the festival.

“Remote” (Canada/Quebec, dir. Marc Roussel, 20 min) is the main attraction of this set and is a bit of a take-off on “Videodrome”. This time, a man, when losing a cable connection, sees in the snowy images a woman who had lived in his apartment 30 years before. Party through the TV and partly through his laptop (Macintosh), he sees that the woman is about to be victimized by an unsolved crime. The time machine effect looks forward, as he is in jeopardy, too, as part of the coverup.

“Disarmed” (USA, dir. Justin Dittrich, 18 min) seemed to be the most popular with the audience, but it is a bit of a manipulation for its own sake. A young white man hides his arms in a shirt and pretends to be armless to win the affections of a young lady, with the help of an Asian friend. Why is she attracted to him? The climax is grabby and gets the R rating.

“Deadline” (USA, dir. Lisa Marie Wilson and Stuart Altman). A woman with cancer meets the teenage son she had given up for adoption before she faces her own terminal situation.

“A Little Chart” (Netherlands, dir. Jeffrey Elmont, Cinemascope, partly black and white) Two men have a chat about some pretty serious stuff going on “while Europe sleeps.” The film seems vaguely related to some assassinations that would follow.

“Desert Wedding” (USA, dir. Alexander Fisher) A young bride-to-be tries to held her chauffeur after a tragic accident, with an irony, which her marriage cannot afford.
Posted by Bill Boushka at 5:35 PM