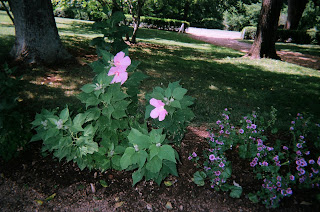 Well, “Meet Bill” is indeed a comedy, and “nicer” than the “Kill Bill” franchise, but perhaps even more risqué. The film, from First Look and Greenestreet Film, is directed by Bernie Goldman and Melisa Wallack.

Aaron Eckhart, as low level bank (“Freedom Family Bank”) manager “Bill” is even more beleaguered than in “Thank You for Smoking”. He dabbles in fantasies of career changes (he would even buy a franchise [“Sweetsweet” – other people’s goals!]) and deals with his wife’s (Elizabeth Banks) infidelity, with language around his buddies about what he “does”. But he is invited to “mentor” a high school student, played by a precocious Logan Lerman (“Jack and Bobby”) who was apparently 15 when this film was shot (in 2007). Logan, “The Kid”, gets into definitely R-rated territory, even a drag scene, helping Bill learn to chase women. The movie might have skirted the edge of the law – although everything has a hetero intention. (The Kid drives a vehicle underage, and participates in a pot (or crack)-smoking scene [or electric cigarettes], too' and how about that on-DVD-deleted "doughnut scene" with the lazy parking lot cop?) Now Bill is quite ashamed of his body, seeing his own pot belly when looking at himself (accidentally) in a mirror – and here the film sets up some more foreshadowing with some swimming pool scenes pre Michael Phelps. Finally, in a mandatory locker room scene, Bill gives in to temptation and to Steve Carell’s example and shaves his own chest, and later even his arms and legs. Would his wife care, or notice? What about his own paramours? Eventually he wishes it back. Bill’s athletic skills improve only modestly, as he can’t master the rock climb.

It seems to me in retrospect that Bill has become "decadent" and sees "The Kid" as "virtue".

“The Kid” of course mentors him (even in the early hunt scene, where The Kid misses earplugs), and has to turn in a paper on banking for a final grade. The movie should have generated some jokes for Saturday Night Live.

But, thankfully, “Bill” doesn’t resemble me. After all, the tagline calls this film "a comedy about someone you know." That's dangerous!

Hollywood has plenty of success stories of “developmentally ahead” teen actors – the studios have to hire studio teachers nevertheless. It seems as though acting may demand more all around skill of a teen than anything else (except maybe [classical] music).

Put poor Aaron Eckhart shows us the humiliation actors have to go through, sometimes. And this film does show an attitude, with its camera angles and lighting (particularly in one specific deleted scene from the DVD): that is, a certain visual fascination with the immature. (The morbidly curious can check out David Skinner's prescient article ("Notes on the Hairless Man") about "Hollywood" and its values, from the June 21 issue of the ultra-conservative "The Weekly Standard"). "The Kid", after all, rules the world in this comedy (or call it "satire").

By the way, First Look indulged in the annoying habit of making us watch the previews on the DVD before we could access the mneu.
Posted by Bill Boushka at 9:41 PM