Pixar offers DVD of short films, and more of its history 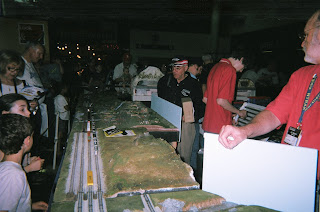 Pixar offers a DVD (available on Netflix as “Pixar Short Films: Vol. 1”) with a number of its most famous short films, which more or less track to its technical and corporate history as a leading animation studio. The DVD really demonstrates the artistic culture of Pixar, which finds fun and expression in abstraction alone.

"The Adventures of Andre and Wally B." (1984), dir. by Alvy Ray Smith, shows that kids who taunt can get what they deserve, in the woods.

"Red’s Dream" (1987), dir. by John Lasseter, deals with the abstractions of juggling and a unicycle. Juggling is supposed to be good for kids with coordination problems, or so I was told in Ninth Grade.

"For the Birds" (2000), dir. Ralph Eggleston, about the sociology of birds on a telephone wire, and their hospitality to strangers.

"Mike’s New Car" (2002), dir. Peter Docter and Roger Gould. A kid thinks that a brain can talk directly to a computer (the fuel injector of a car). Maybe it can.

"Jack-Jack Attack" (2005), dir. Brad Bird. A mother finds she can set a disobedient baby on fire to calm him down. Except in abstract animation, a rather dangerous idea.The Dies Irae from Mozart’s Requiem plays.

"One Man Band" (2005), dir. Mark Andrews and Andrew Jiminez. Two street music performers compete for a girl’s attention. Joshua Bell at the DC Metro these performers are definitely not.

"Mater and the Ghostlight", dir. John Lasseter and Dan Scanlon. Along Route 66 in the Midwest, a mysterious light chases cars. Maybe it is ball lightning, maybe a UFO.

"Lifted" (2006, dir. Gary Rydstrom). This is one of Pixar’s most famous shorts. A UFO driven by a teenage alien tries to abduct a sleeping rancher, who remains unaware. When the kid runs into problems, he winds up taking everything around except the rancher. The humor in the film rests with the mailbox.

The DVD contains a 23 minute documentary "The Pixar Shorts: A Short History" (2007), dir. Tony Kaplan, Erica Milsom. The most interesting part of the documentary refers to the history of their computers. In the 1980s, the supercomputers had less than 1% of the processing speed of an iPhone chip. Later they talk about the idea of toys becoming “alive.” There was a controversy over whether the short films made money, and whether the company should be in the hardware of software business. Eventually the company “graduated” to feature films. Pixar discontinued short films for a while, as it made Toy Story.

The DVD contains four "Sesame Street" episodes: “Surprise”, “Light and Heavy”, “Up and Down”, and “Front and Back”.
Posted by Bill Boushka at 7:12 PM